Christmas is now over, and we are just starting the New Year and there was a lot of chatter on our plastering forums about the best plasterers’ radio available. 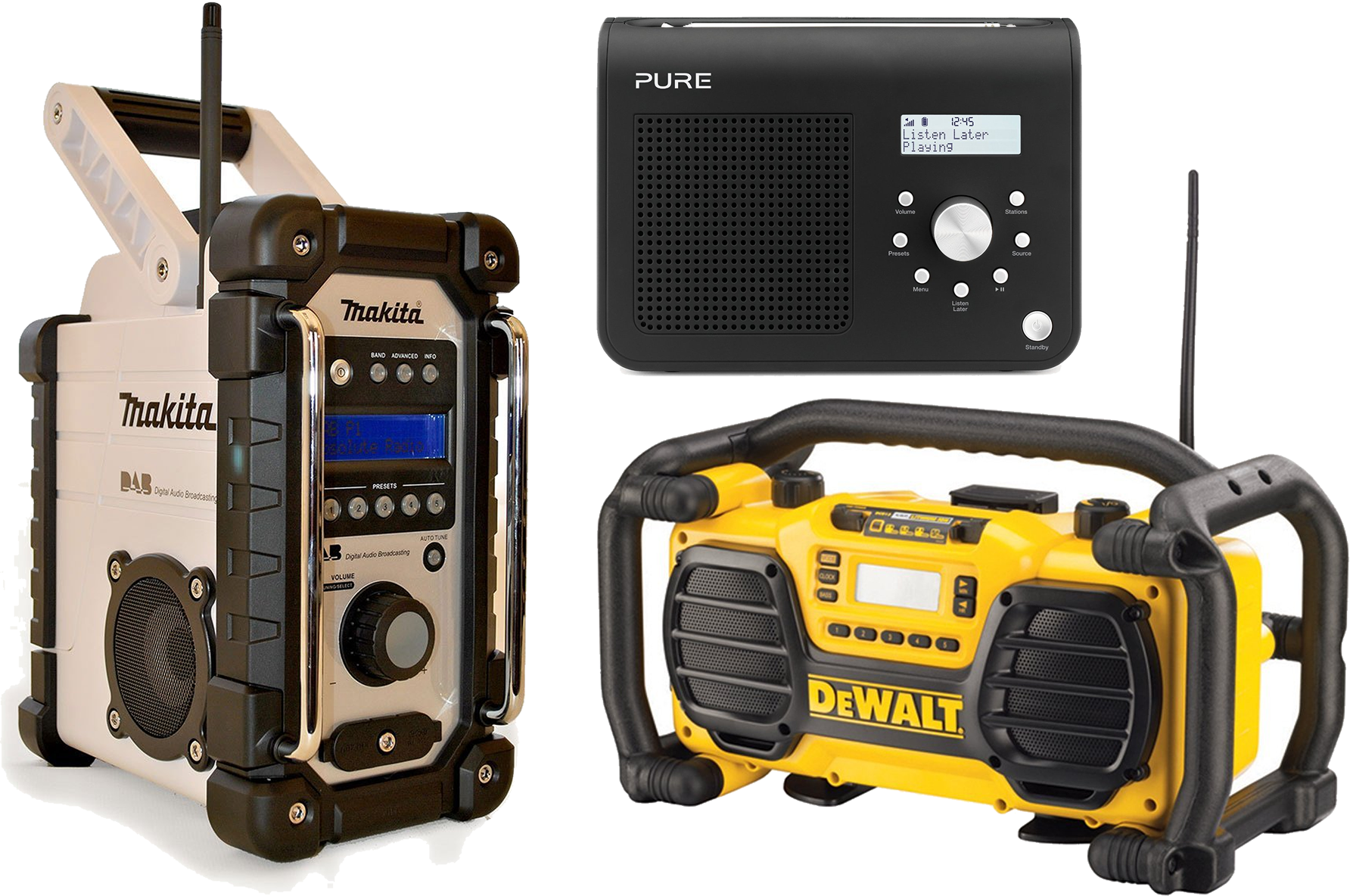 Now we all know that a plasterer’s radio has a hard life and a radio that lasts a year or so in my eyes is a good thing. I could not survive without music when I am plastering, and that is the gods’ truth. I feel like I am going insane when it is silent and even as I write this, I have my headphones on listening to music and generally being totally absorbed in the task at hand, and it is exactly the same as when I am plastering.

I have been through a lot of radios in the past, and although I don’t do a lot of plastering these days when I do you can be sure that the radio is the first thing to get packed in the van.

A lot of building sites ban radios and when I “had” to work on these sites I use to plug my iPod into a pair of small headphones, and with a woolly hat on nobody could tell I was listening to music. However, it’s completely stupid and dangerous but Health and safety officers never seemed to mind as they were more interested in bitching about me wearing a hat underneath my hard hat.

Anyway moving away from the bonkers health and safety laws, let’s get back on to the subject and that’s plasterers’ radios. 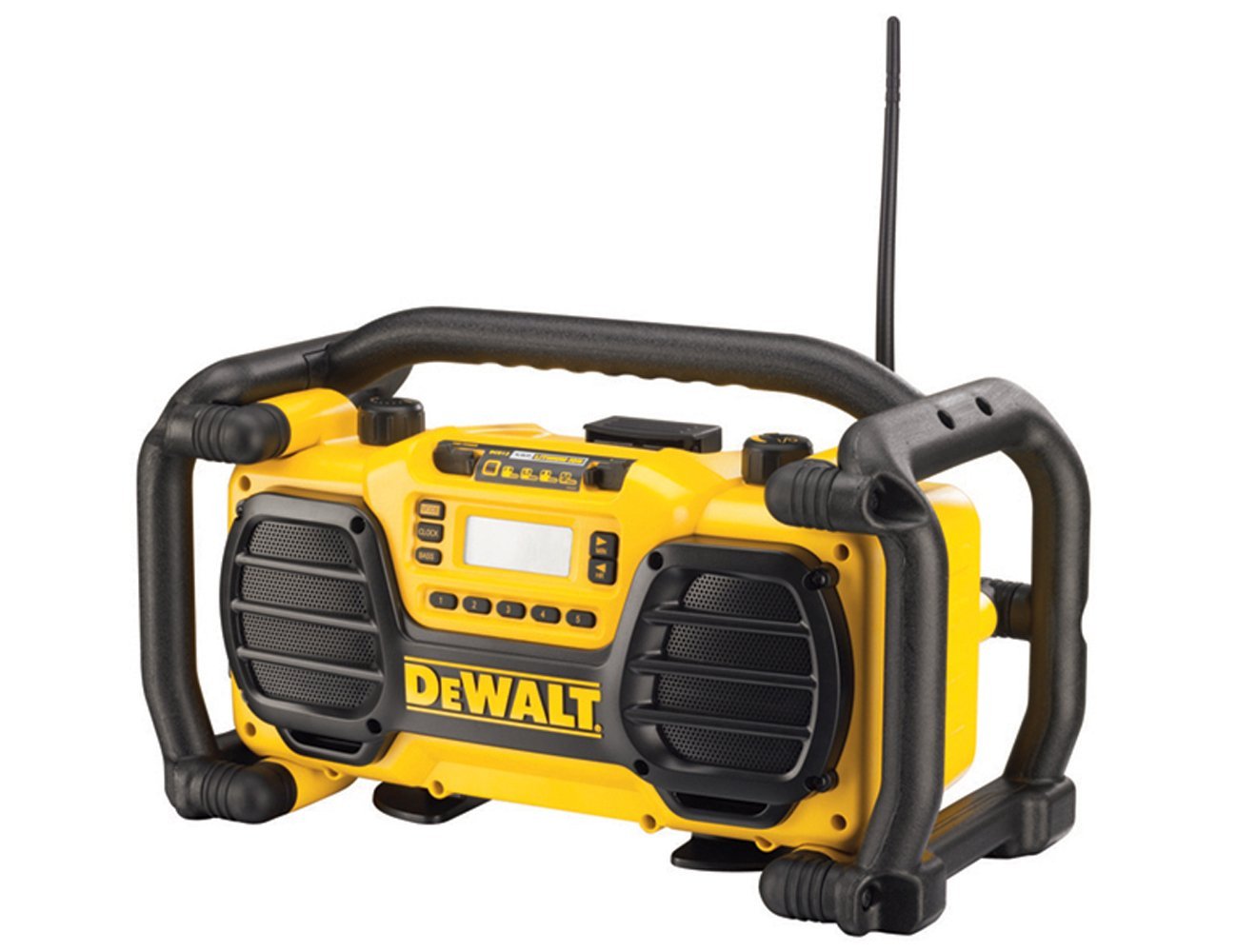 One of the first “builders’ radios” I had was the Dewalt radio. This was a monster of radio. It weighed a tonne and every time a crane swung around you had to re tune it. It really did start to annoy me and there is nothing worse than having a poorly tuned radio – well there is, and that is no radio at all, but you get my point. I use to spend hours out of my life trying to pick up any radio station, for the crane to then move again and that white noise would fade in.

Not only, that, with the Dewalt radio, it went through batteries, and even with a fully charged battery it would never have enough juice in them to last a day’s work. It  was also bad at staying tuned, and it looked tough but in reality, after a year of trauma all the casings had broken, and the aerial had been replaced with a bit of corner bead, and the digital dash was unreadable.

The next radio I bought was a normal domestic radio, and it was DAB radio, and it had fantastic sound quality. You didn’t spend your life trying to make aerials by wrapping wire around bits of copper trying to get past the Classic FM station. It was a good radio, and it has served me well. The only trouble with the Pure DAB radio is that when you are on site, it has to run on batteries, and that was a bit of a ball ache. The first one I had needed something like 8 AA batteries and every morning I would have to stop and buy spare batteries. Yes, I could have bought rechargeable ones but by this point, I was not expecting the radio to last a vast amount of time, and I never thought I would stay on a 110v building site long enough. 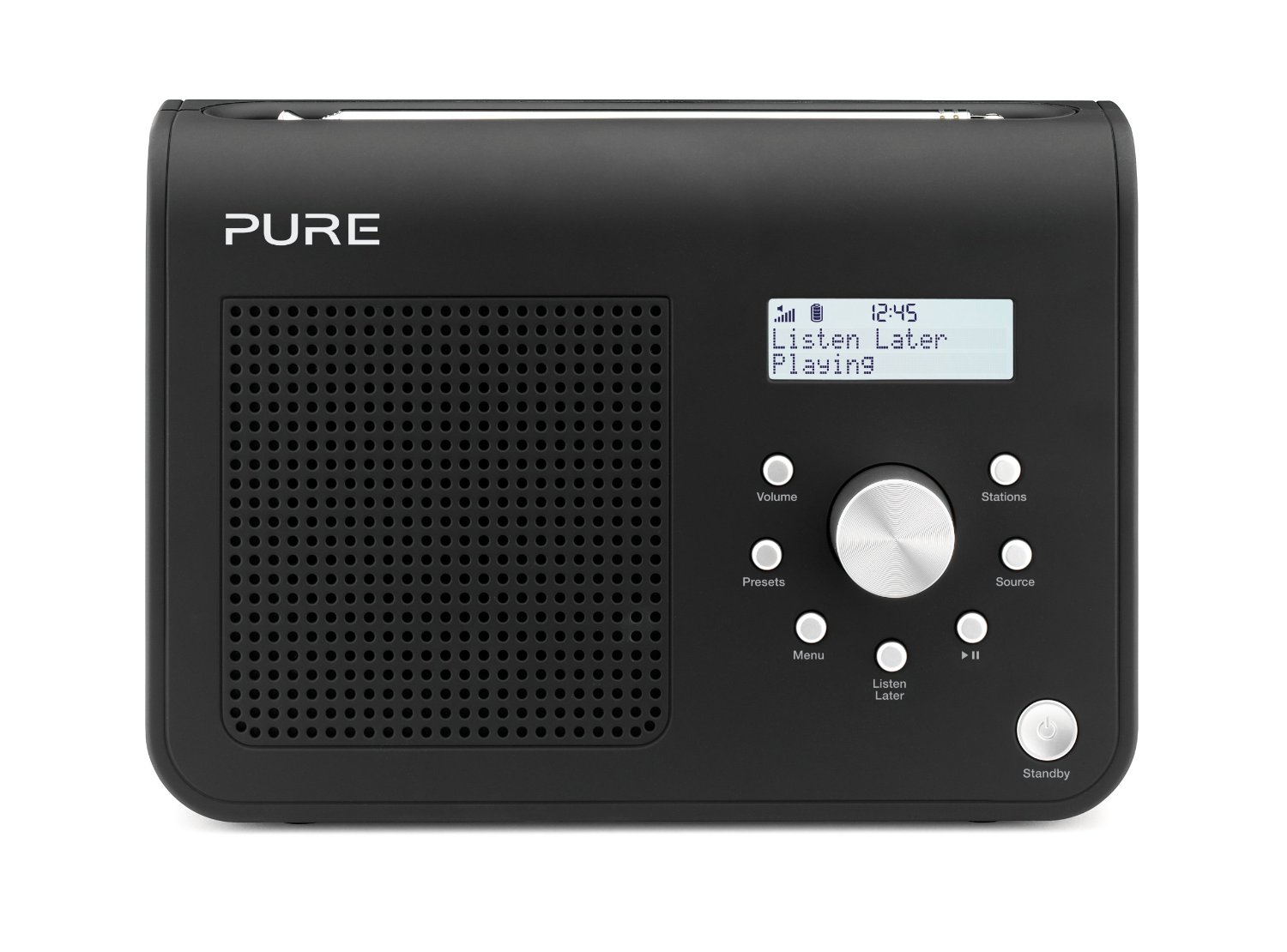 The Pure DAB radio was a great radio, and although it is not waterproof and not exactly built for the abuse that it gets, but it has lasted a lot longer than any other radio I have owned, and it is still on jobs with me even to this day.

To solve the waterproof issue with the radio I bought a roll of cling film and just wrapped the whole radio in it, and you don’t get any loss in sound quality, and it’s pretty near watertight. It’s not ideal for every plasterer, but if you’re a domestic plasterer, then this radio is great and also small enough to carry around with you without the need of a wheelbarrow unlike the Dewalt radio.

The next radio is the Makita radio and wow what a radio!! This radio has to be one of the most sensational radios I have ever heard. It’s got amazing bass and its fairly light to carry about. It has awesome battery life, but it also runs off Makita batteries, and the new models take all types of Makita batteries. What more could you want? Oh and it’s reasonably priced at around £100 🙂

A window fitter friend of mine had one of these Makita Radios, and this is even before the realms of DAB and the only thing digital about it was the screen. It got a bit of a beating, and I must have dropped it off scaffolding, covered it in expanding foam and left it in the rain, and it is an absolute trojan of a radio. When I arrive to a plastering job now I can tell straight away if another trade is using a Makita radio purely by the epic bass it produces, and you can pretty much be certain that they will have it cranked up and singing badly but who cares, we have music.

Although I am about 900 words in now and quite excited I have not even mentioned the Makita DAB beast that has been lurking around on the Plasterers Forum this Christmas and has been haunting me via text messages. Yes, people are sending me text messages with photos of this new radio, and I have to say I want one, and I don’t think I would want it to get dirty. I don’t know what Makita has done to this fresh design, but it is making grown hairy men tremble in the knees and have been on a lot of Christmas lists and by the amount of posts on the forum, made a lot of happy plasterers on Christmas morning. 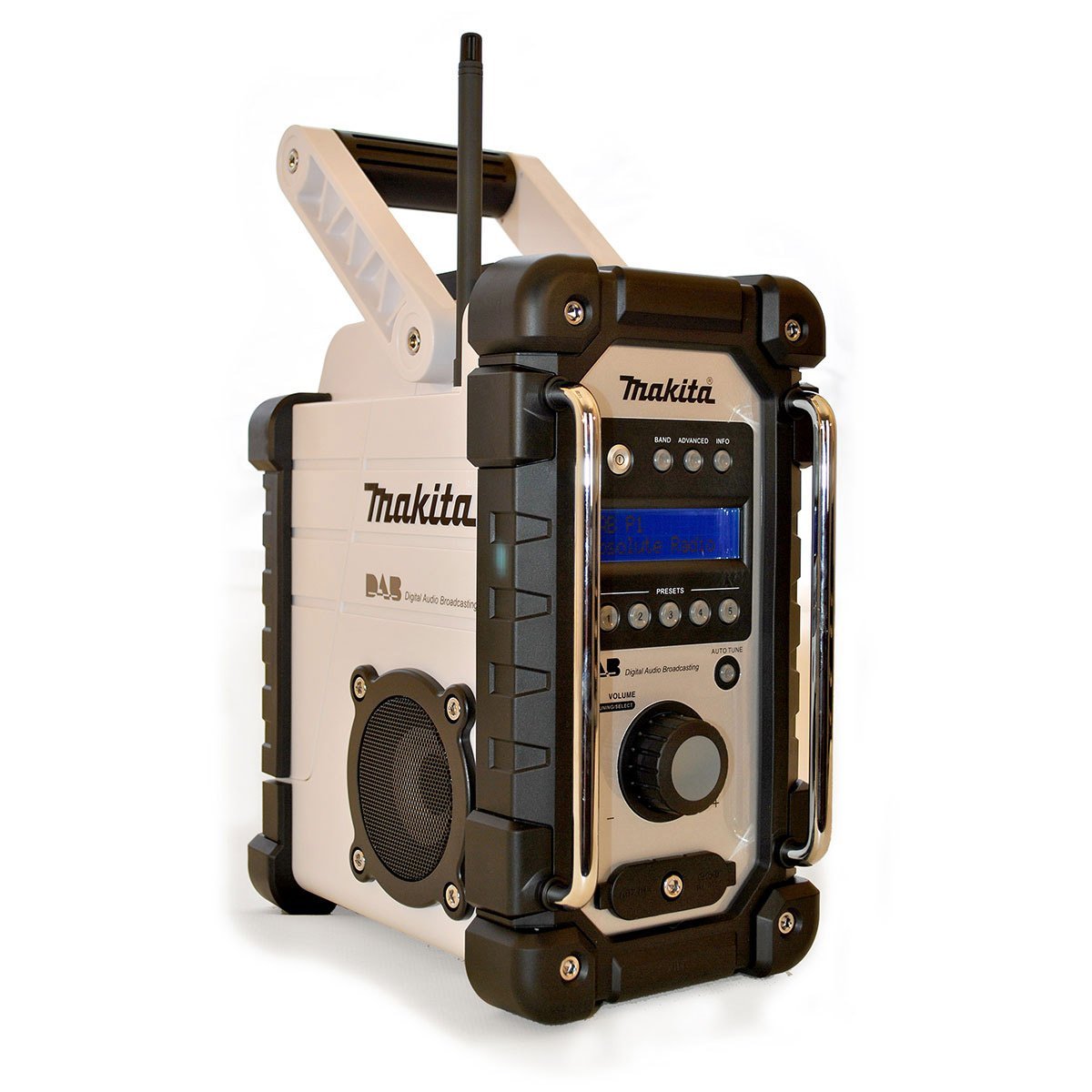 Rugged and robust DAB radio, great sound with a wide choice of channels, Powerful output, AM/FM and digital only stations, Showerproof, with a tough moulded ABS casing, Anti shock loud speaker system, Working from mains power and many Makita batteries. The Makita Radio even has an output in it so you can plug your iPod in or whatever MP3 player you have. Seriously, I as I am writing this, I am tempted to order one myself. It is chrome and black, and it’s shiny and white… oh boy it’s just outright sexy. Ok, maybe I am getting carried away, but still you get my point.

You can pick up the Makita radio from around £100 and to be fair I think Amazon is one of the cheapest places I have found it. This is something I will be putting on my list when my DAB radio dies a death (probably sudden). What am I saying I don’t think a radio will be on my list its just as essential as my trowel or mixer, and I won’t go without a radio ever.

I have never met anybody that has been unhappy with a Makita radio, so I have to say I am voting this as the ultimate Radio. Obviously, before you spend your hard-earned dusty money make sure you do your proper research, and if you want to start a thread on the Plasterers Forum and see what others are saying.

Thanks for reading, please comment below if you think I am wrong and let me know what radios you are using, and we can all just drool over them.

The government is due to launch its £2 billion Green Homes Grant scheme in late September, which will enable homeowners to make savings on their energy bills while … END_OF_DOCUMENT_TOKEN_TO_BE_REPLACED

Working as a skilled tradesperson can offer several great benefits. You will have the opportunity to pursue something that you’re passionate about, have lots of job … END_OF_DOCUMENT_TOKEN_TO_BE_REPLACED

Makita UK has launched a new and improved collection of belts and pouches to its extensive and popular range of accessories. The newly designed range makes it even easier … END_OF_DOCUMENT_TOKEN_TO_BE_REPLACED

In a positive move for the future of skills and talent in the plastering industry, British Gypsum has announced that its Site Ready Skimming Course has been successfully … END_OF_DOCUMENT_TOKEN_TO_BE_REPLACED