A couple of weeks ago, I had a spare day, and I decided that I would drive up to Plasterers 1 Stop Shop in Cheltenham. I to try visit Plasterers Forum sponsors as often as I can throughout the year, just so I can see what’s new and generally get involved, and it means days out of the office which is never a bad thing. 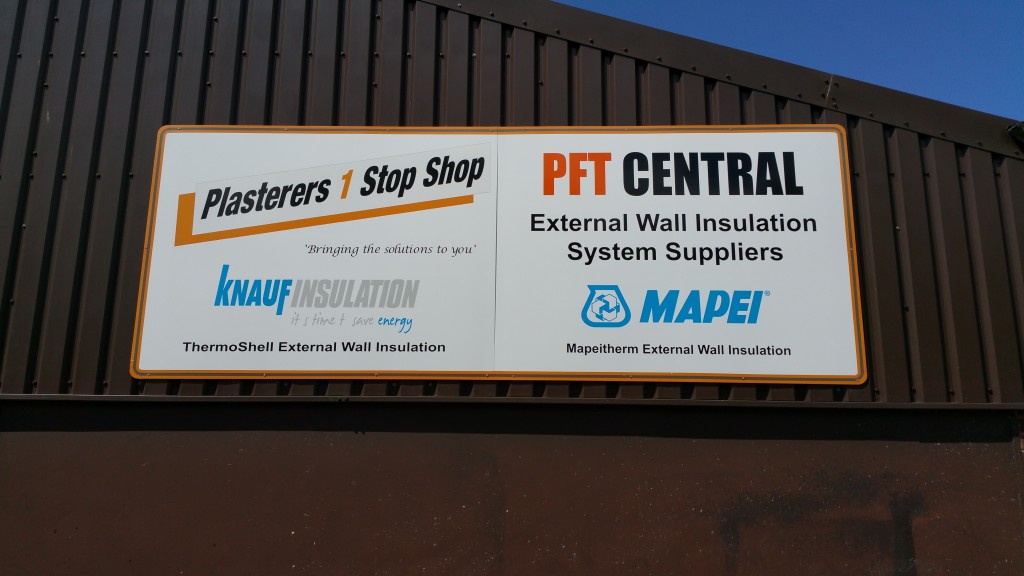 I was at Plasterers 1 Stop Shop for most the day, and I had the pleasure of meeting some people learning about new MAPIE product for the concrete repair industry but the thing that really stood out was a machine that Andy Hill showed me. 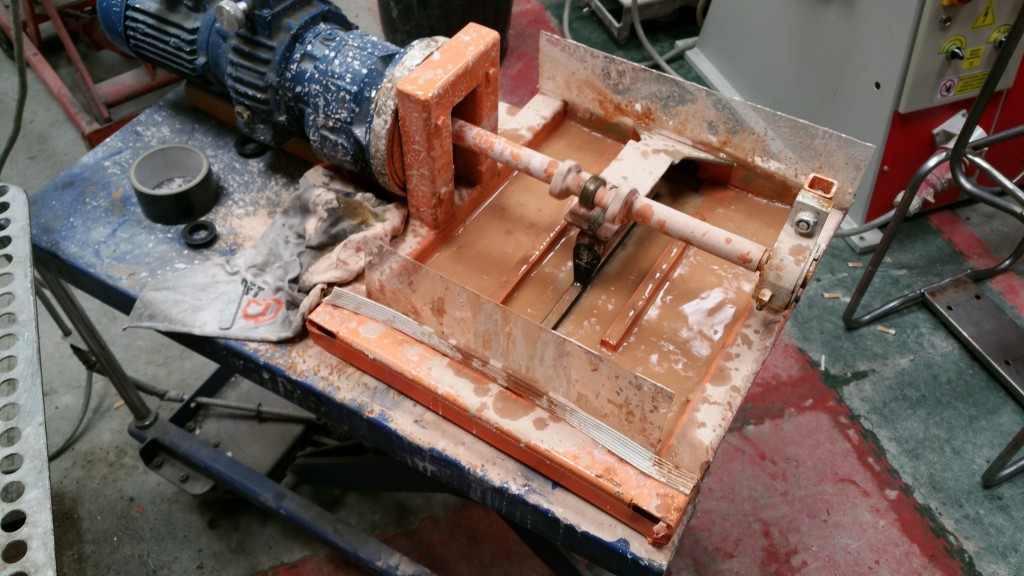 You only have to look through the plasterers forum and numerous other social media sites to see that there have been a few issues with the adhesive that sticks the Nela SuperFlex blade to the shank. This machine was a machine that Andy designed to test Nela SuperFlex trowels. 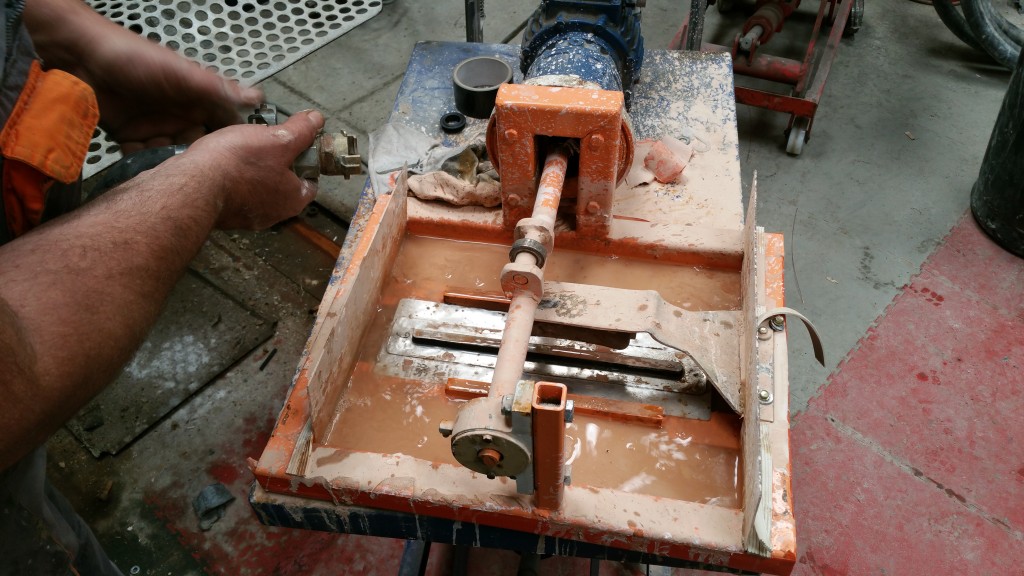 When a new batch of Nela SuperFlex trowels comes into the warehouse, Andy randomly selects a number of the trowels and puts them through the paces with the machine, and they are often tested to destruction.

As you can see from the video, the machine is working away, and this is often left on overnight to work. This simulates the pressures that a plasterer will put on the trowel and the machine applies more pressure. However, you may also notice that the Nela Superflex trowels are sat in dirty plaster water as well. This is to try to get the conditions exactly as they are in real world situation. 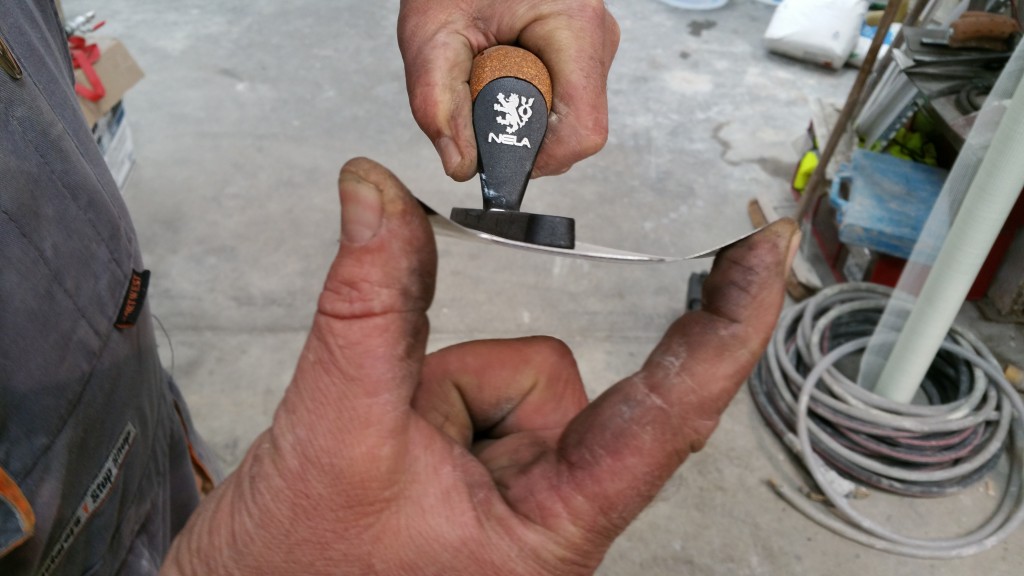 However, the first thing most plasterers do when they see a Superflex trowel and that is to bend it the other way, and I have done it in the past as you want to see how flexible the blade is but as you see from the image below it is not good for the trowel. Bending a Superflex trowel the wrong way strains the adhesive tape that holds the blade to the shank.

A Nela Superflex trowel needs looking after and although Ryan and Andy’s hill can test to make sure that they are only sending out the best trowels, you do still need to be aware of how fragile they can be, and I have seen a lot people who have dropped them. Even dropping a normal trowel, there is a risk of permanently damaging them but dropping a SuperFlex trowel is almost certain trowel suicide.

If you want to know more about the Nela SuperFlex, then head over to www.plasterersforum.com as they have been discussed a lot. I also did a Nela Superflex review a little while back as well.

To buy a Nela Superflex go and visit www.plasterers1stopshop.co.uk directly.

The government is due to launch its £2 billion Green Homes Grant scheme in late September, which will enable homeowners to make savings on their energy bills while … END_OF_DOCUMENT_TOKEN_TO_BE_REPLACED

Working as a skilled tradesperson can offer several great benefits. You will have the opportunity to pursue something that you’re passionate about, have lots of job … END_OF_DOCUMENT_TOKEN_TO_BE_REPLACED

Makita UK has launched a new and improved collection of belts and pouches to its extensive and popular range of accessories. The newly designed range makes it even easier … END_OF_DOCUMENT_TOKEN_TO_BE_REPLACED

In a positive move for the future of skills and talent in the plastering industry, British Gypsum has announced that its Site Ready Skimming Course has been successfully … END_OF_DOCUMENT_TOKEN_TO_BE_REPLACED