Recently I was sent a few samples of ExtraTime plaster retarder sachets. I had a good think about how to test this new product; I thought that I could spin up two batches of plaster, one with ExtraTime in, and put on some walls.

However after further thinking I decided that this would not be a fair test as the different walls may have had different suction rates. I also thought that I could have found some board work to go over but even then it was not clinical enough and I wanted to see the difference so decided to leave the plaster in the buckets.

The ExtraTime Bucket Test Was Born…

I went to my local builders merchants and picked up two bags of British Gypsum Multi-Finish, two gorilla tubs along with a black water bucket, I even went to the extent of checking that the finish bags had the same date on.

Sunday afternoon came around and I could not think of a better way to spend it… OK, I lie – =The wife wanted the plaster and buckets out of the living room and so the constant nagging got my arse into gear and I started. 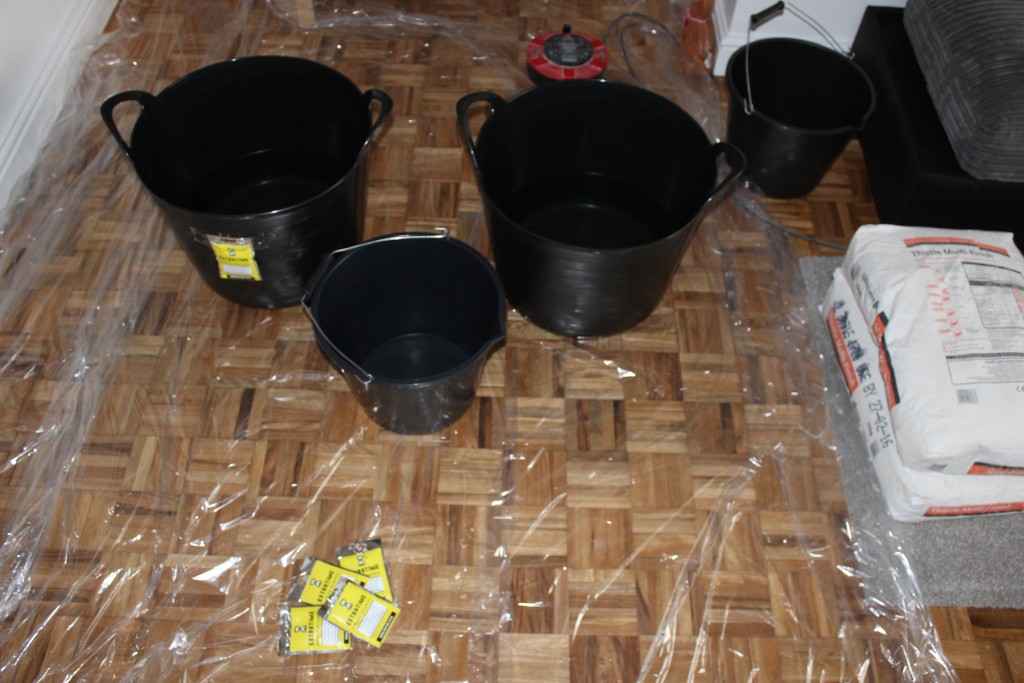 I was keen to see what the ExtraTime plaster retarder was capable of so I set up in my living room put some plastic sheeting down to protect the oak flooring and I was ready to start. 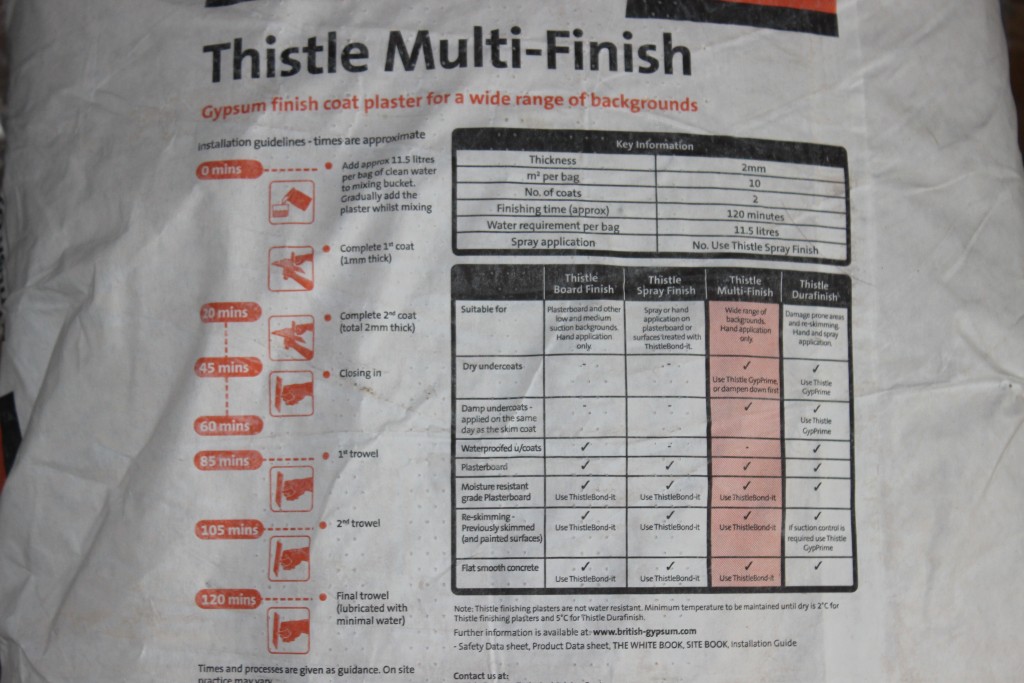 The decision was made to mix the ExtraTime bucket up first, clean the whisk off then spin up the other gear without any in and time each bucket with its own stopwatch. One thing I would like to point out is that I decided to use the exact specification for the amount of water needed to mix up a bucket of skim and that is 11.5 litres. Where the hell did British Gypsum get that number from? I like my gear a bit sloppier than that… However, I need to keep things equal and textbook so 11.5 litres it is.

Exactly 11.5 litres of water from an inside tap was poured into the bucket and I ripped open the packet of ExtraTime and poured it into the water and gave it a swish around with the bucket trowel.

Once the Extratime gear was mixed up, I started the stopwatch on my tablet and set to work on the control bucket. I cleaned the whisk off and started mixing up the Multi-Finish again with a clean bucket and 11.5 litres of water and once again the finish was far too stiff, but thankfully I am not going to be slapping this on a wall so I was not too worried.

The gear was mixed and I started the stopwatch on my phone and then sat and waited… It was like waiting for plaster to dry….

An hour in and the standard mixed plaster was now pretty much off and you can see from the video that it is tearing rather than spreading. The ExtraTime mix at an hour is still movable and spreading around the bucket. 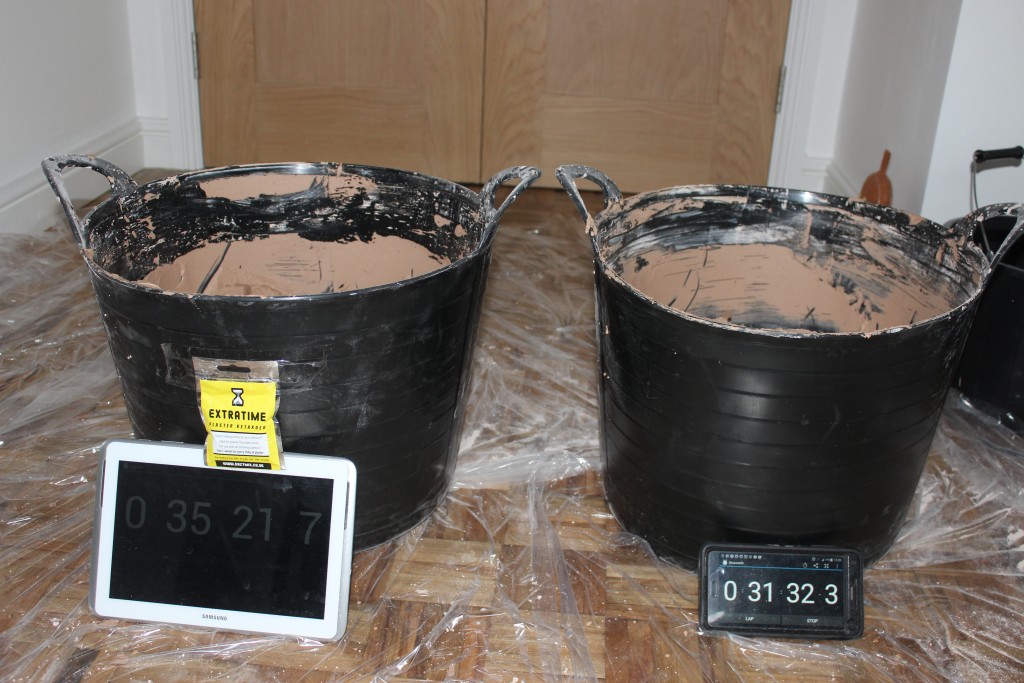 90 minutes in and the standard mix is now turning to gravel but the Extratime mix is still hanging about but it is on the turn now and starting to pull in.

After an hour and 45 minutes, the ExtraTime is now getting quite hard to move about and the standard mix is done. I waited until two hours were up but I think you can see that ExtraTime has added extra time to the set and even half an hour after I stopped the clock and tipped the finish out of the bucket the ExtraTime mix was still pliable. 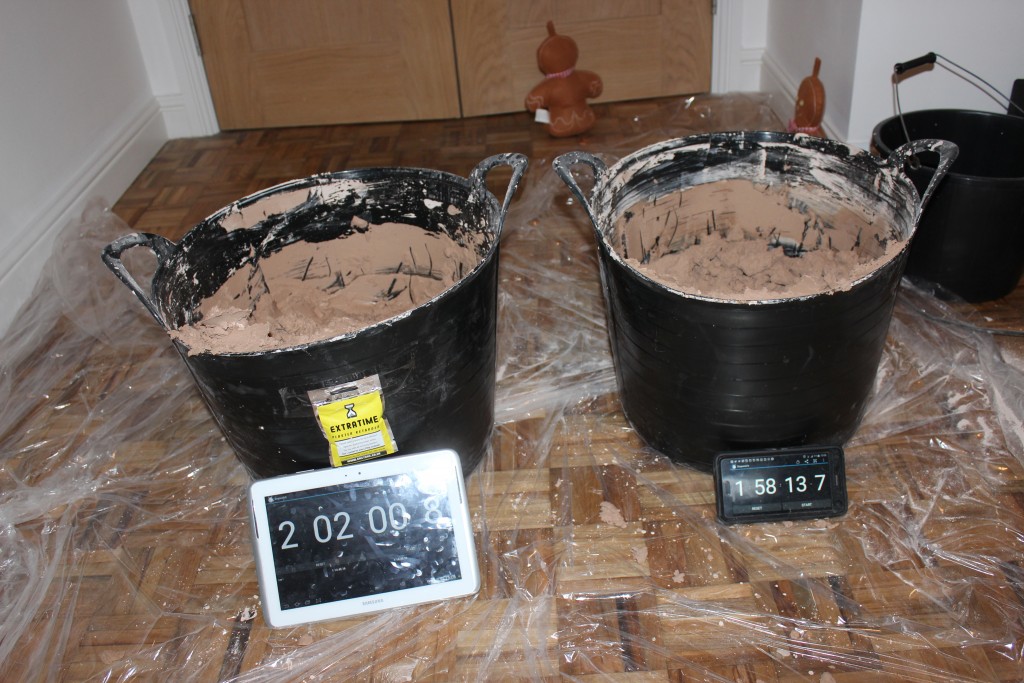 At first I was concerned that ExtraTime would make multi finish flash set so it would hang about for 30 minutes longer and then “bang” it has gone off but no, it is pretty consistent and dried as you would expect a standard mix would.

What is the Point Of ExtraTime Plaster Retarder?

When I shared my earlier article on ExtraTime plaster retarder a lot of people were questioning what is the point of it and the typical macho plasterer response of work quicker bla bla bla and that was to be expected. However those plasterers that sat around and thought about it for a while started to realise that they could now put on bigger sets. Yes a bigger set in the morning means you could maybe put on a couple more walls than you would normally and then in the afternoon you could have a smaller set giving you more time to clear up or prep for the following day.

I also know that there is a demand for a plaster retarder because, for the last 1o years of running the Plasterers Forum it has been a question that has come up a lot and I mean a lot, it comes up at least once a week. The normal response is “use the rolling set” method or simply “don’t panic” and crack on. You could use Cream of Tartar, which is a bit like ExtraTime but with Cream of Tartar you will have to gauge how much you want to add yourself and to be honest, I am far to lazy to do that. ExtraTime has done all the maths for you and supplies it in handy sachets that you need for a 25KG bag of finish.

The other group of people that may benefit from using ExtraTime are students and dare I say it DIY’ers… they are both a bit clumsy but having that extra bit of time would have helped in their learning especially on awkward jobs.

You will not need ExtraTime in every mix and you will not need it for every job but that day your bucket bitch lets you down and phones in sick. I think you will be counting its blessings and coupled with the fact that it is not expensive, in fact, it’s cheap, most places are selling it for £2 a sachet and that sachet does 25KG of Multi-Finish.

The government is due to launch its £2 billion Green Homes Grant scheme in late September, which will enable homeowners to make savings on their energy bills while … END_OF_DOCUMENT_TOKEN_TO_BE_REPLACED

Working as a skilled tradesperson can offer several great benefits. You will have the opportunity to pursue something that you’re passionate about, have lots of job … END_OF_DOCUMENT_TOKEN_TO_BE_REPLACED

Makita UK has launched a new and improved collection of belts and pouches to its extensive and popular range of accessories. The newly designed range makes it even easier … END_OF_DOCUMENT_TOKEN_TO_BE_REPLACED

In a positive move for the future of skills and talent in the plastering industry, British Gypsum has announced that its Site Ready Skimming Course has been successfully … END_OF_DOCUMENT_TOKEN_TO_BE_REPLACED