I take every opportunity to get out of the office and get to see people plastering whether they are time served or fresh to the trade, and the SkillBuild events are just the ticket as you get to see the best of both worlds. I get the pleasure of seeing plasterers that are still learning the trade, and I get to meet the people who have trained them so, all in all, its always worth the day out.

This Skillbuild event was based just around the coast from me in Hastings and after a very early start for me, and the sun was shining and the sky was blue, and I was kicking myself that I was in the metal box and not on my bike zipping down the outside of the standstill traffic but never mind it gave me a chance to make a few phone calls on the way and generally keep The Plasterers Forum network moving forward.

After two hours and a boring journey, I was at Sussex Coast College Hastings, and first impressions was that it was a very new modern college which is very unlike what I was used to when I was at college it was bright and there was an air of excitement but then that could be me and the fact the sun was shining, but anyway, I was in and I was chatting to the event organiser and I was introduced to Nick from British Gypsum and Lee, who were the plastering judges.

I got to Skillbuild just in time to see the students start skimming their boards, and I was a little disappointed that there were few students competing in the plastering competition but at least I got to see more of the student and watch their progress. 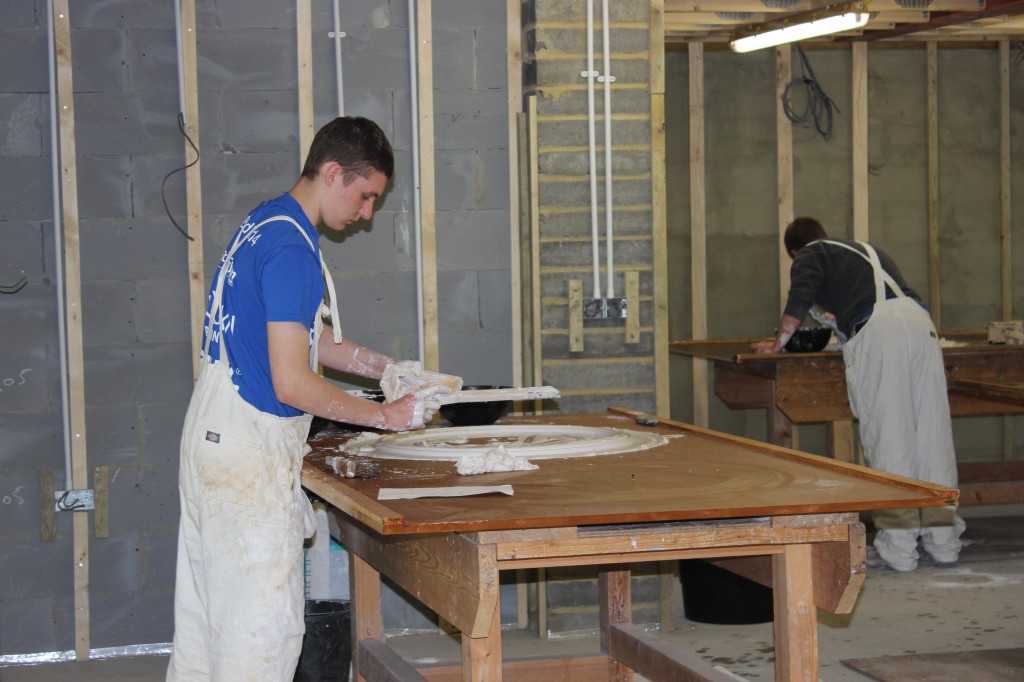 The students had to skim a sheet of plasterboard fix some coving and then run a series of fibrous moulds all within one day. The juniors only had to create a diamond shape using fibrous plaster while the seniors had to spin two circles and have a diamond running through and between the circles. 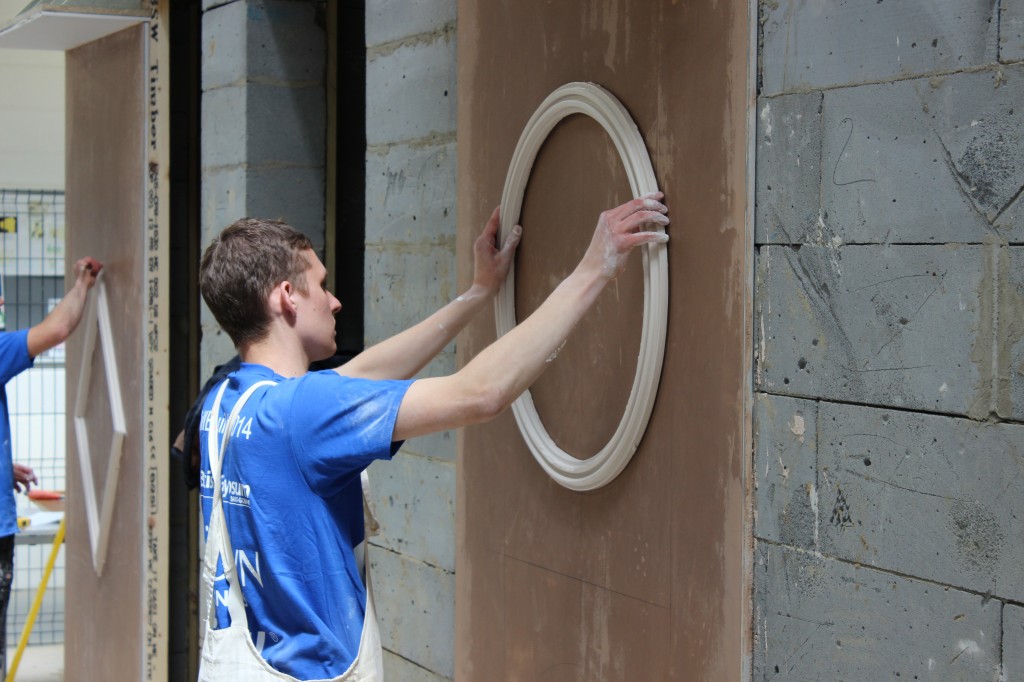 The students are given six hours to complete the tasks this should be done fairly comfortably within that time frame, but you can see that the pressure was getting to some of the students.

I enjoy visiting colleges and seeing the students but talking to plastering lecturers is also a treat and reminiscing about the old days when Hardwall was grey, and nobody used anything other than steel trowels and the thought of using a plastic trowel was ridiculous yes those were the days. However modern times are here, and as myself and four lecturers were outside drinking tea and generally trying to put the industry to rights and right on cue Scott from Speedskim arrived carrying SpeedSkims and the conversation soon turned to methods and techniques and how they work, etc. 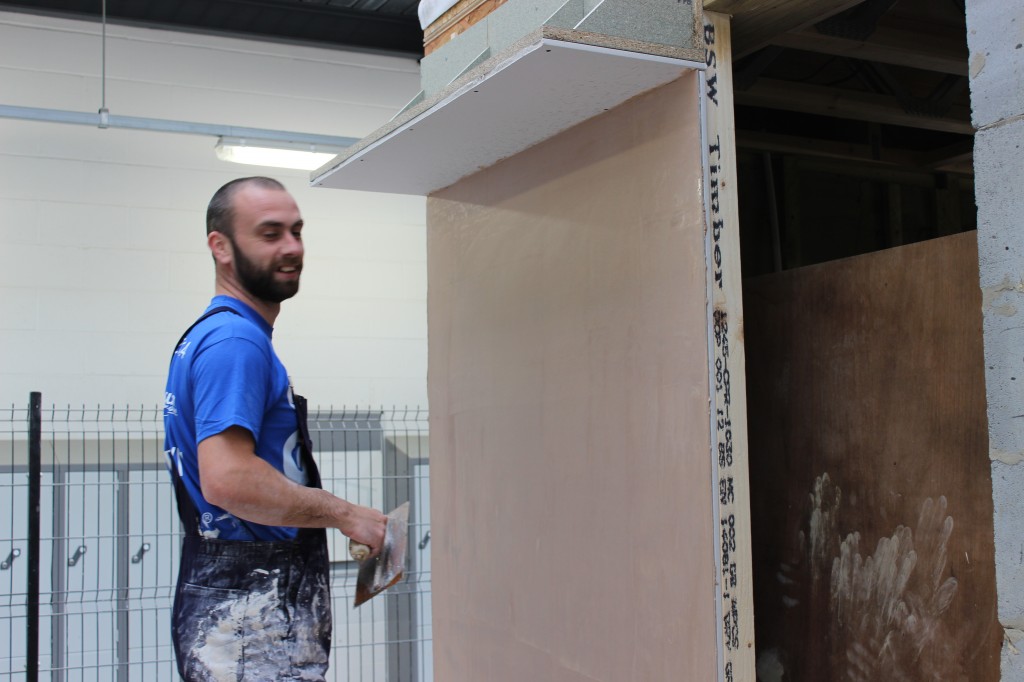 It was soon lunchtime and myself, Speedskim Scott. British Gypsum Nick and Lee all headed for lunch, and Sussex Coast College Hastings had put on a subway lunch which I have to say was epic it was packed with food and was very much unexpected, and it was soon scoffed and we were back in and watching the students. By this time, they were applying their fibrous moulds to their skimmed boards, and you can see that it was all taking shape and starting to look like it was meant to. 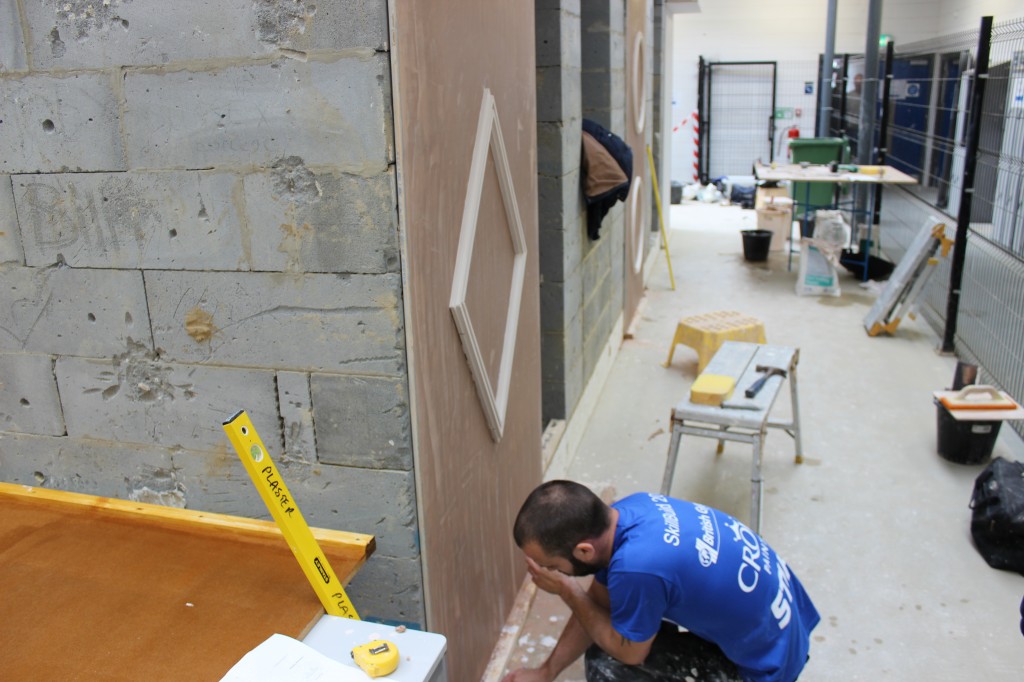 It was no 14:30 and I really needed to hit the road as I had a meeting that I needed to get to and not being on the bike meant that I had to allow for the desperate A27 traffic, so I said my good-byes and, I was promised a few more days out at other colleges to see how they work and how they teach their students and also offered the chance to have a play with fibrous plaster which I am most definitely looking forward to.

The government is due to launch its £2 billion Green Homes Grant scheme in late September, which will enable homeowners to make savings on their energy bills while … END_OF_DOCUMENT_TOKEN_TO_BE_REPLACED

Working as a skilled tradesperson can offer several great benefits. You will have the opportunity to pursue something that you’re passionate about, have lots of job … END_OF_DOCUMENT_TOKEN_TO_BE_REPLACED

Makita UK has launched a new and improved collection of belts and pouches to its extensive and popular range of accessories. The newly designed range makes it even easier … END_OF_DOCUMENT_TOKEN_TO_BE_REPLACED

In a positive move for the future of skills and talent in the plastering industry, British Gypsum has announced that its Site Ready Skimming Course has been successfully … END_OF_DOCUMENT_TOKEN_TO_BE_REPLACED