Keeping hygroscopic salts at bay in an unusual Victorian refurbishment is a new role for Drybase Flex, the damp-proofing system from Safeguard Europe — the UK’s leading specialist in damp- and waterproofing, and masonry repairs.

Built in 1850, the house in the Urmston district of Manchester suffered from extensive hygroscopic salt dampness issues (Salt dampness) so the owner brought in Oldham-based Olympic Construction to tackle the problem. 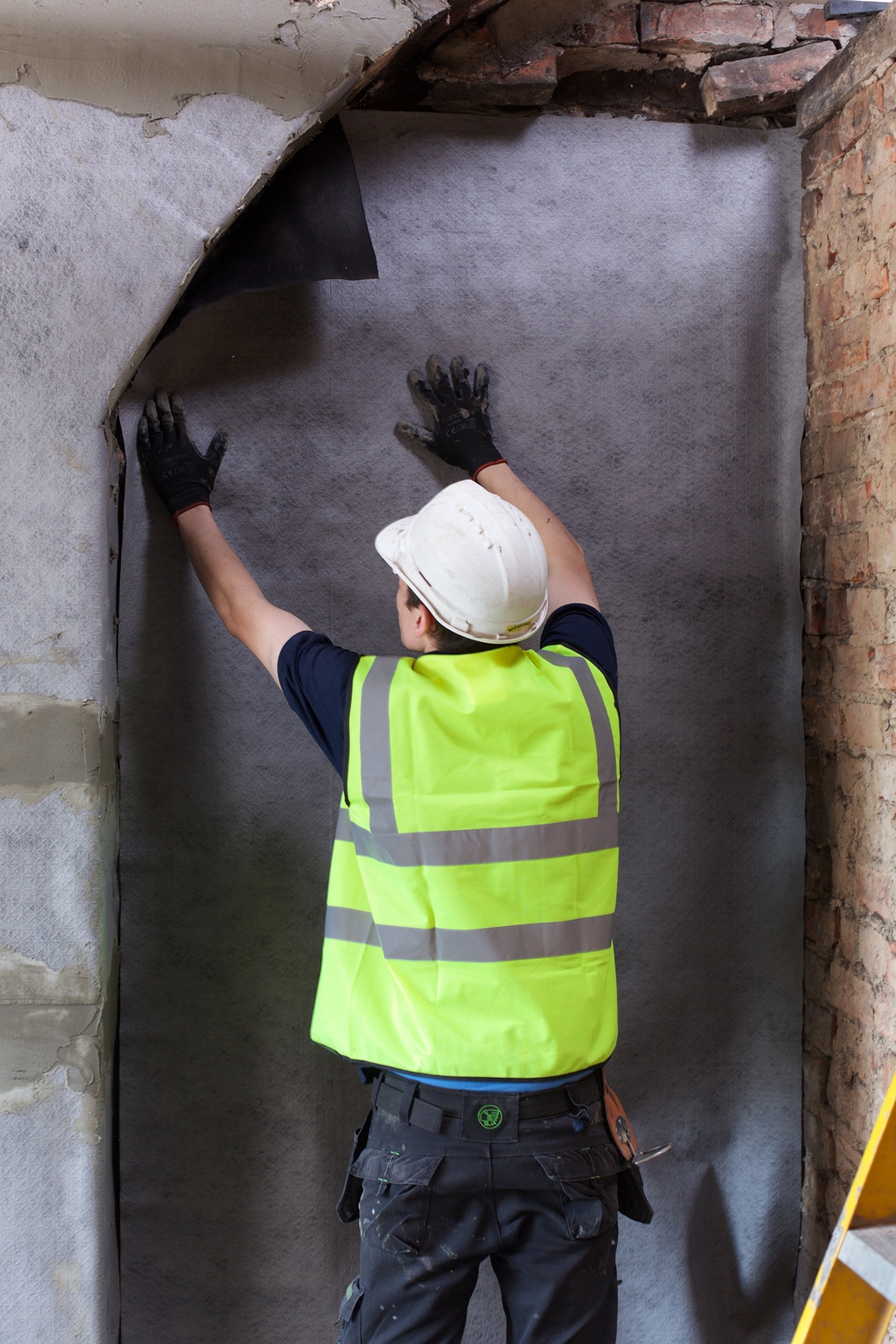 According to director and surveyor Adrian Dawson, the issue stemmed from the property’s conversion from being a terrace to a semi-detached house. The neighbouring property to right was demolished, he says, to make way for a housing development. This exposed the right hand single leaf party wall and chimney structures, which became the gable elevation, so the contractors constructed a further single leaf party wall as the weatherproofing layer.

“These works were very poorly executed, so that water penetrated into the roof line and chimney structures over a long period,” says Adrian. “This resulted in the hygroscopic salts, held within the chimneys, being taken up into solution, and that led to extensive dampness and degrading of the installed plaster to the internal elevations of the property.”

So Olympic Construction rebuilt the gable, rear elevation, chimney and roof so the structure was watertight but, once the external defects had been addressed, the extensive hygroscopic salt migration to the inner leaf needed treatment. 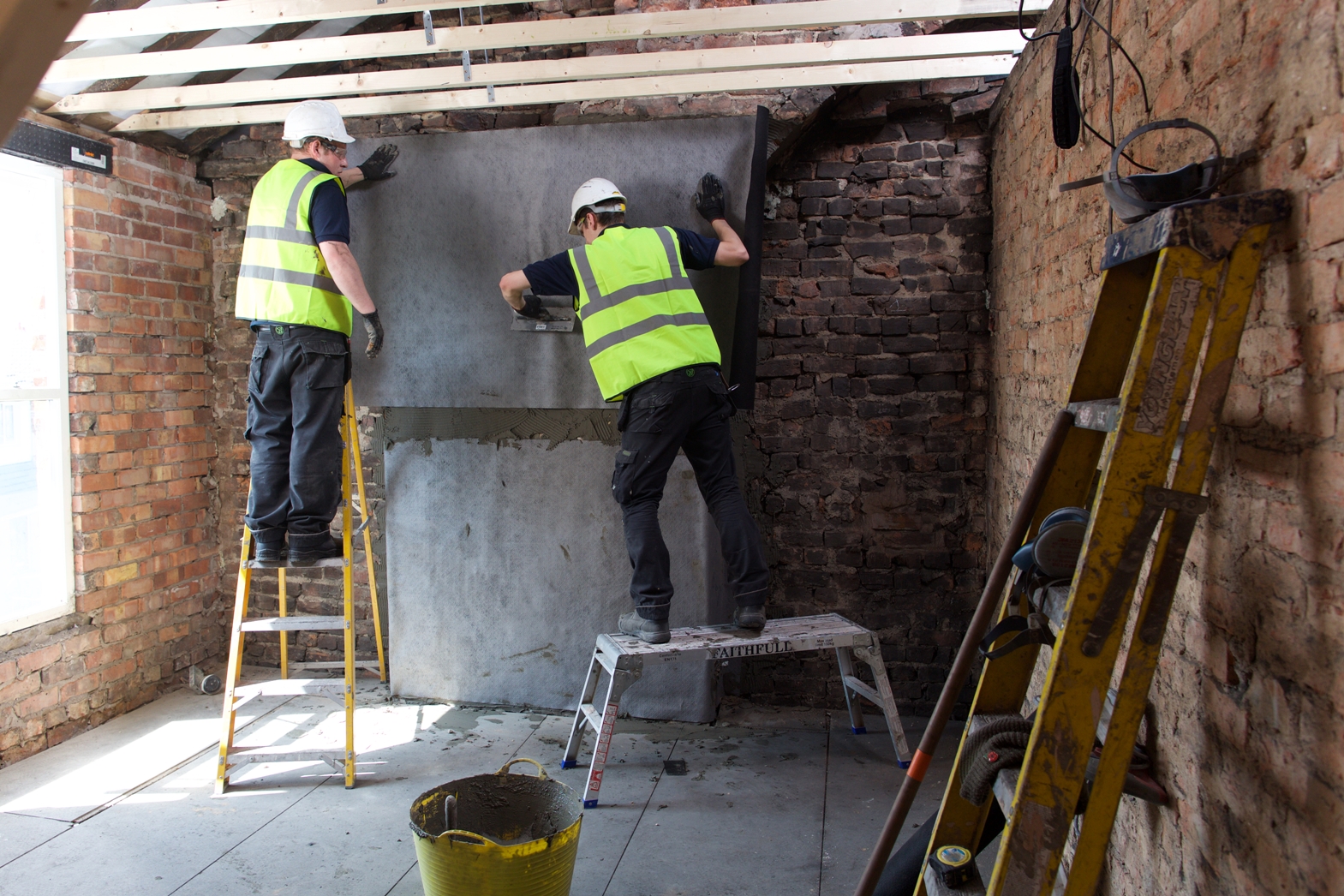 “I decided to install ‘Safeguard’s Drybase system rather than other systems such as a cavity drained membrane, because it bonds to the brickwork, like wallpaper, which means there are no voids, so should water ever penetrate the brickwork,” explains Adrian. “The Drybase Flex membrane will stop any water or salts leaking back into the structure. We’ve worked with Safeguard for a number of years, and have used the Drybase system in a number of different areas.” 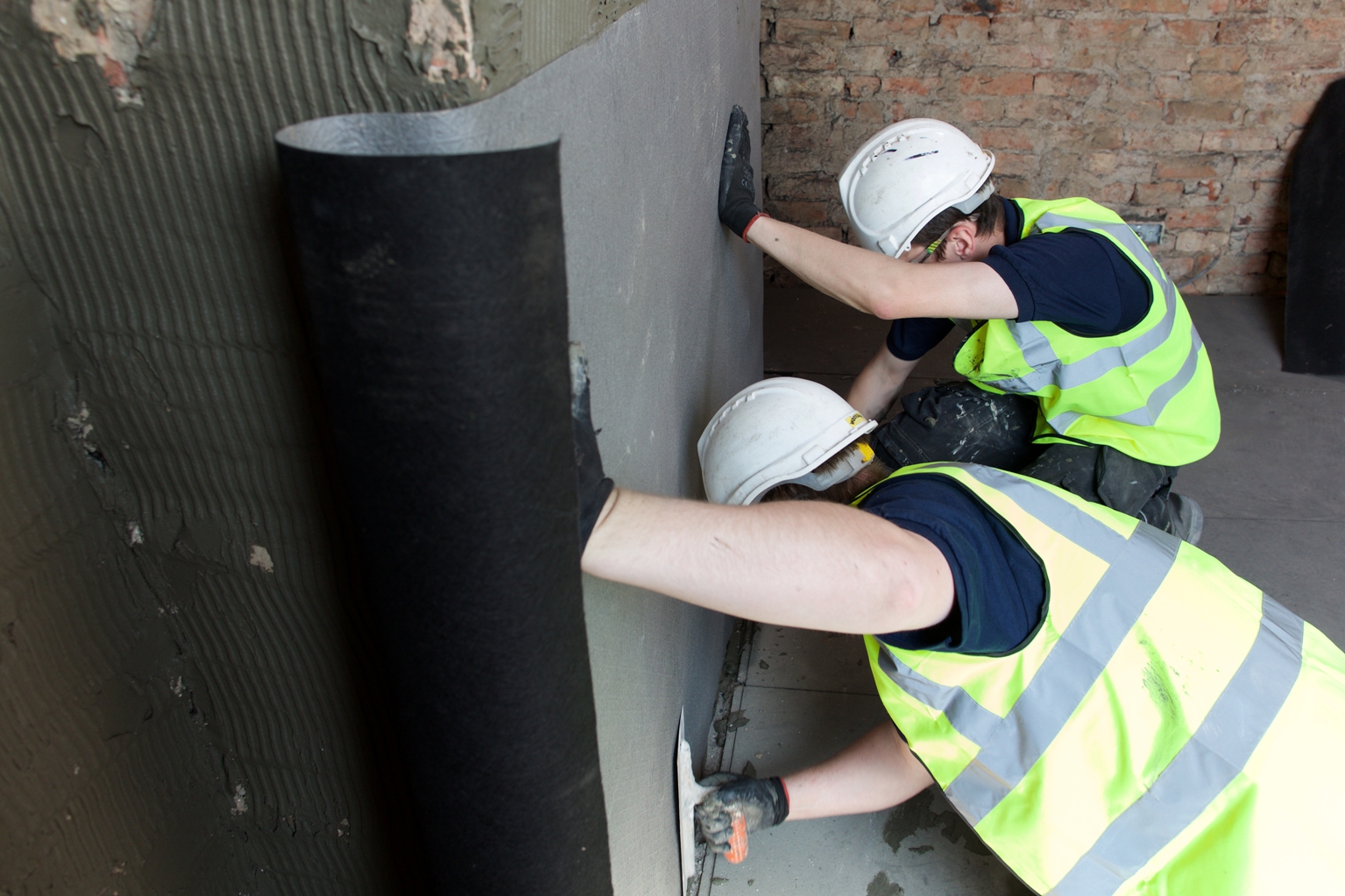 To date the issues to the inner walls of the first floor were treated earlier this year, and Olympic Construction will return to the property to undertake the second phase of the remedial works to the ground floor levels of the property in September.

When finished, the property will not only be free from damp but will also be cheaper to heat because the Drybase system allows light weight plasters systems to be applied so the walls will have a higher thermal performance. In the short term, this cuts drying down times so redecoration can start earlier but, in the long term, the improved thermal properties result in lower fuel bills and a reduced risk of condensation and, consequently, mould growth. And it is a long-term solution – the service life of the Drybase flex is 50 years. 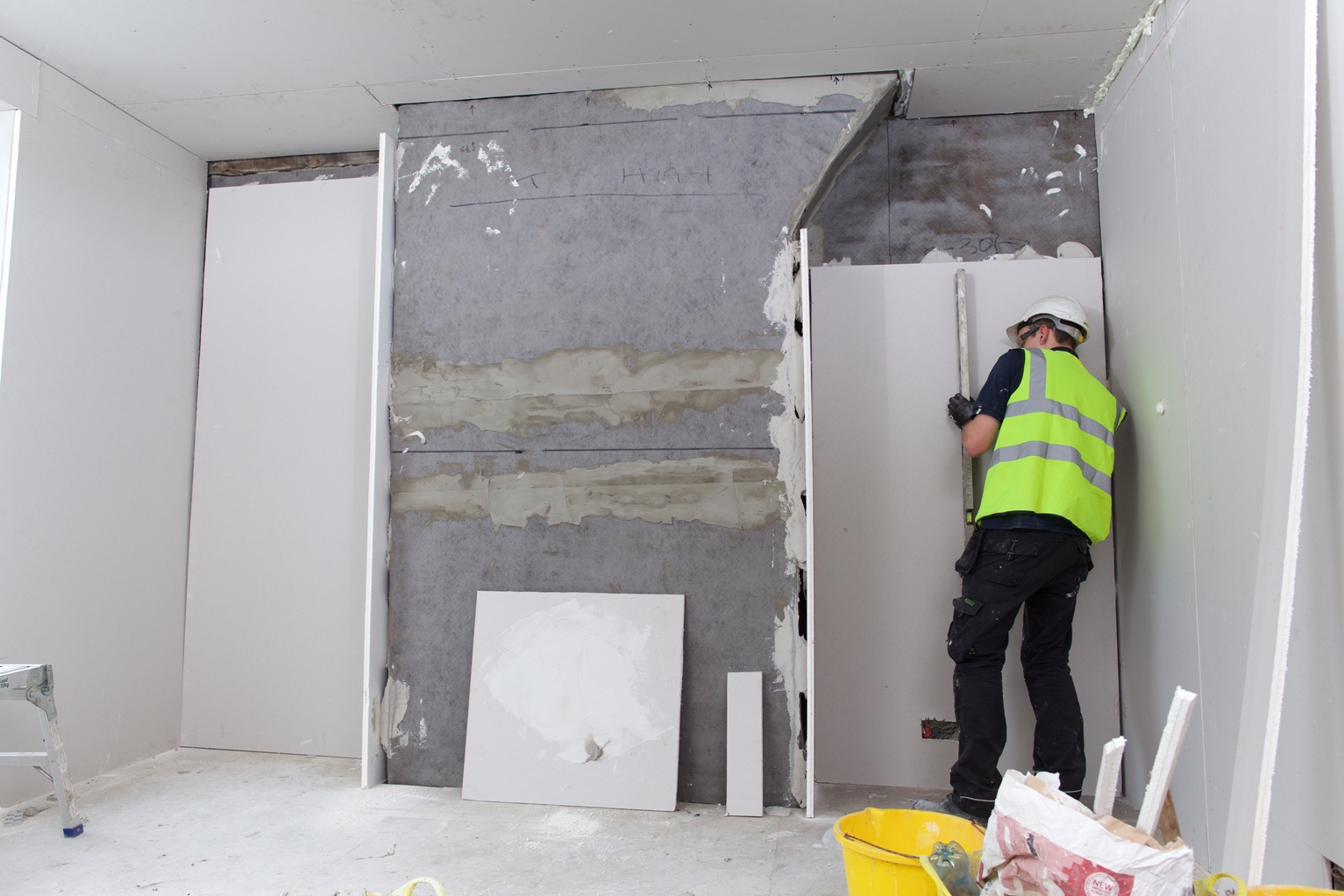 Comprising two components, the membrane and adhesive, the Drybase Flex system protects against dampness in walls without any need to drill or install plugs.

Consisting of a 1.5 mm thick flexible polypropylene sheet, the membrane has a fleeced surface on both sides. This ensures that there is a good key, or adhesion, for the adhesive that fixes the membrane to the wall and so plaster can be applied directly to the face.

A polymer modified cement-based product, the adhesive is supplied in powder form ready to be mixed with water, and applied using a suitable trowel.

The government is due to launch its £2 billion Green Homes Grant scheme in late September, which will enable homeowners to make savings on their energy bills while … END_OF_DOCUMENT_TOKEN_TO_BE_REPLACED

Working as a skilled tradesperson can offer several great benefits. You will have the opportunity to pursue something that you’re passionate about, have lots of job … END_OF_DOCUMENT_TOKEN_TO_BE_REPLACED

Makita UK has launched a new and improved collection of belts and pouches to its extensive and popular range of accessories. The newly designed range makes it even easier … END_OF_DOCUMENT_TOKEN_TO_BE_REPLACED

In a positive move for the future of skills and talent in the plastering industry, British Gypsum has announced that its Site Ready Skimming Course has been successfully … END_OF_DOCUMENT_TOKEN_TO_BE_REPLACED