The stairs have arrived and they came in lots of pieces, and we checked and double checked that they were all there with the delivery guy who worked for the company that made them, so we were confident all the bits were there, and so we started to work out how they go together.

Luckily, for me, I had my wife’s father down for a few days to help me as he had a fair bit of electrical work to get done and the stairs and drop landing is a big deal for us as its the main thing that is slowing the job up, and we cannot do much until the drop landing is in, and so I was buying time. 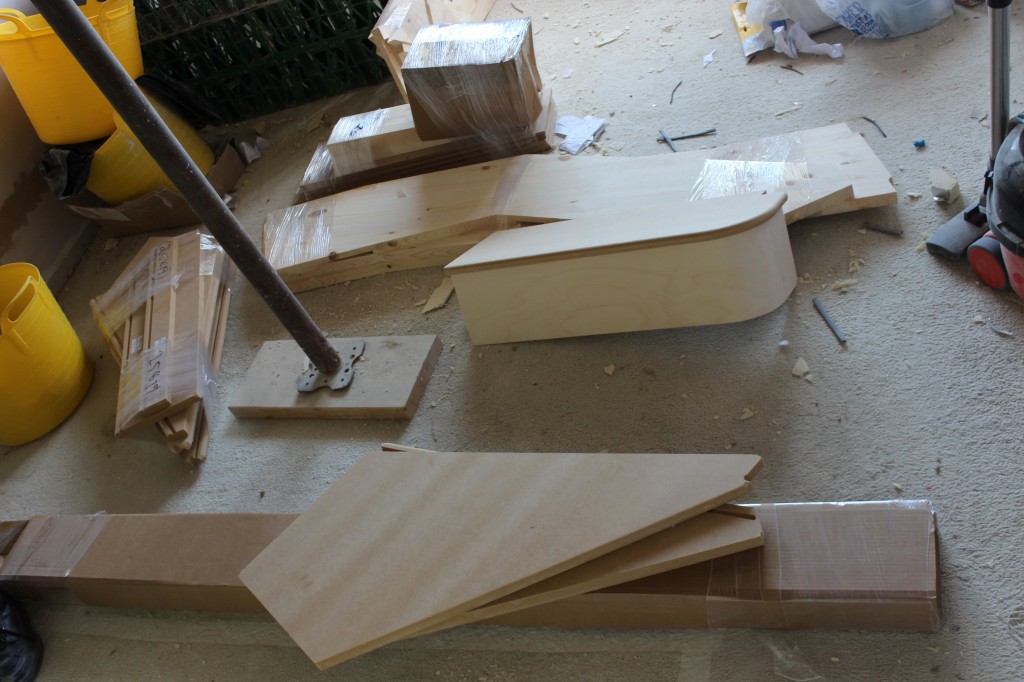 So with the help of my father in law we waved bits of timber around swearing at each other and trying to wedge the newel posts up and in the end we had dry fitted the important steps to our three winder staircase, and only then we could see where the drop landing had to go, and we could confidently work backwards from there. 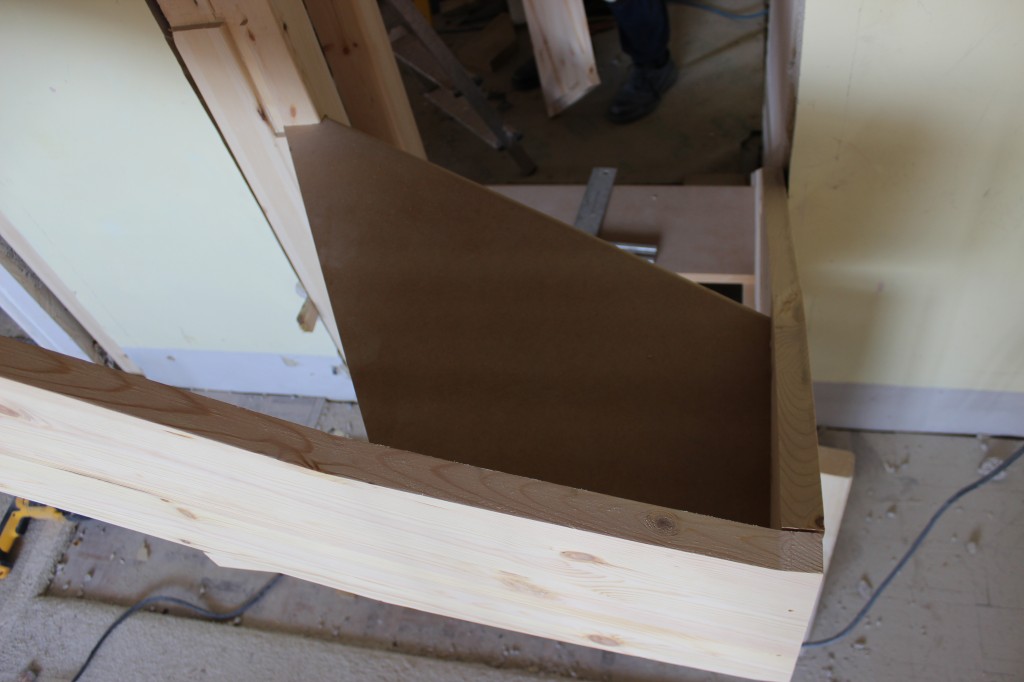 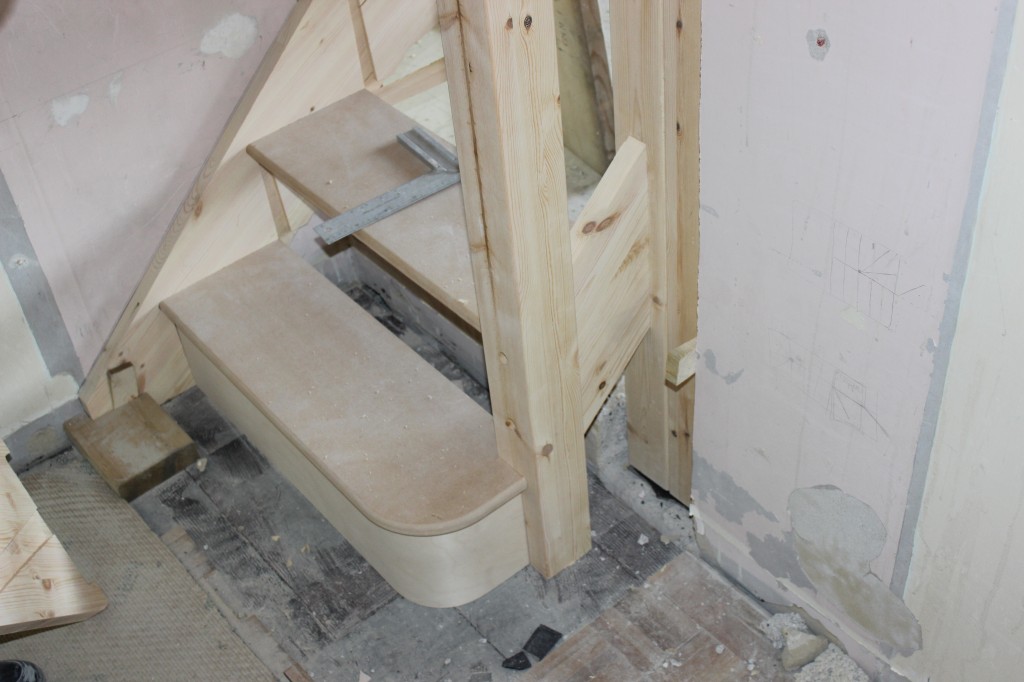 I had made a slight change to the plans of the staircase and then realised that the drawings’ person had designed it so that there was a huge bulkhead in what would be my bedroom so a few head-scratching moments later, and we had worked out another way to hang joists and hopefully the building control chap is going to be happy with the way it’s going to work.

That was the first day done…

We were at the merchants for 07:30, yes that is bloody early for me and to be honest I knew it would kill me, but I was up and ordering timber and then negotiating the price and negotiating again to try to get it to the price point I wanted to pay. I haggled the hell out of the company, and finally, they broke and gave in to me.

We were back at the property for 08:15 and cracked on getting joist’s cut out and beams in and generally trying to push on and get these damn stairs in, and it seemed to be a slow process. My OCD with levels and everything being spot on was slowing us down, but it had to be done. 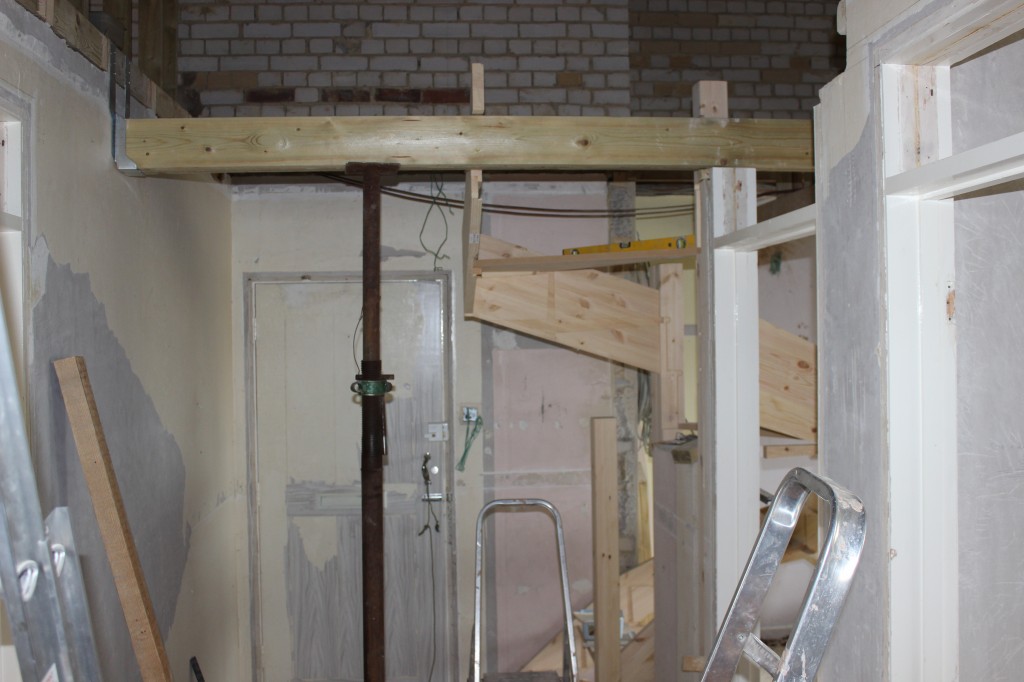 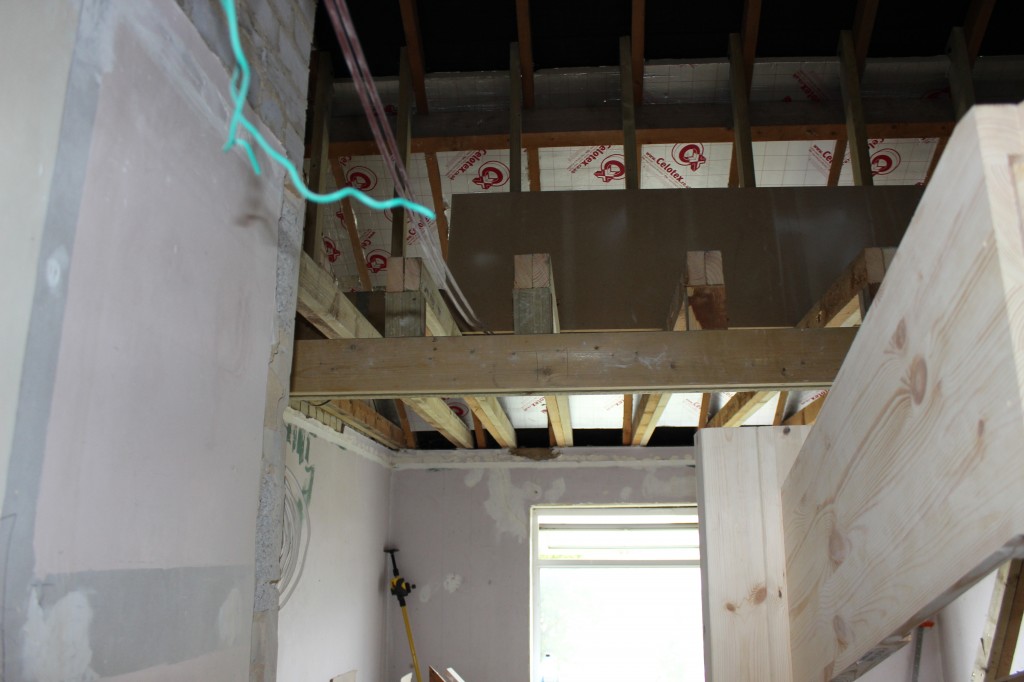 Once the drop landing beam that the stairs are going to hang off was in we could then take the stairs apart and start from the bottom and start gluing and clamping them in. Working our way up slowly but surely, it sounds simple, but it was hard work and very taxing on the brain. Remember that myself or my father in Law had never fitted stairs so it was all trial and error… 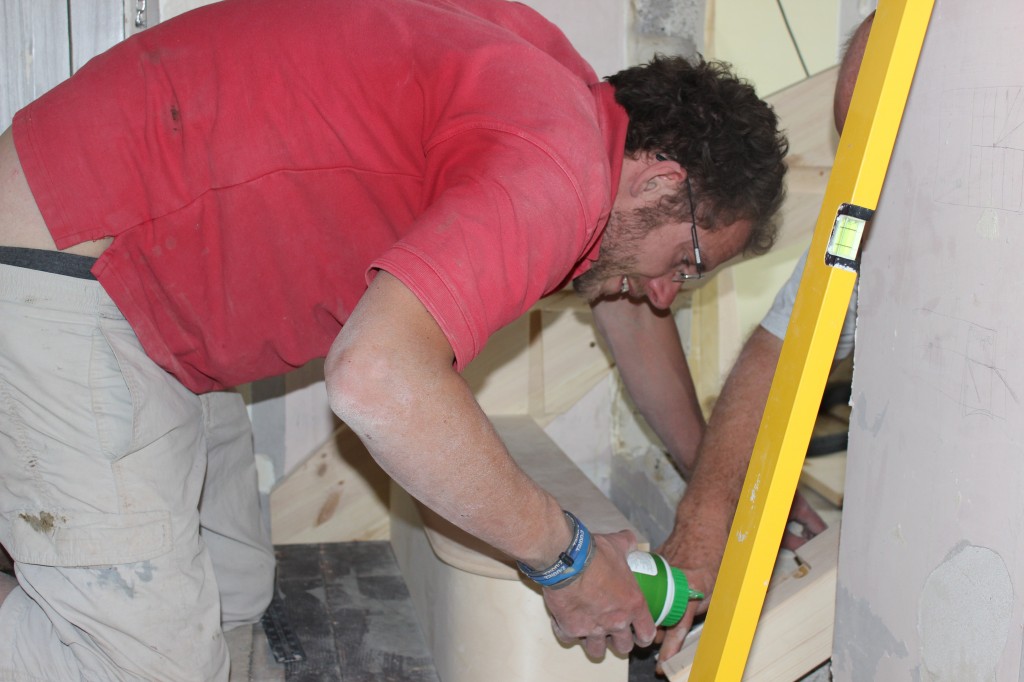 The first steps went in quite easily and the glue we were suing was some expanding foam type wood glue and it was sticky as help and we got in to a bit of a pickle at first, but we got it all in hand soon enough. By the end of the job, I was dab hand with the glue and was very impressed with its strength and how it expanded. I think I started to annoy Jane a bit by going on about how good it was… whoops!! 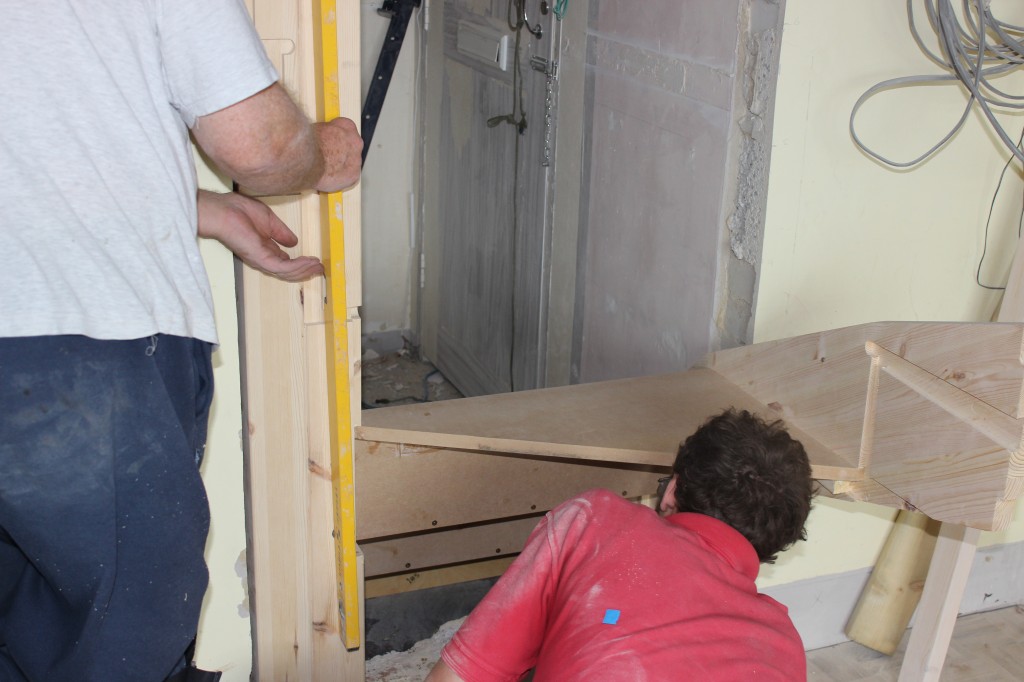 The treads were going in then the risers, then we had the first winders to go in. A fair amount of jiggling and measuring and generally just checking. We had to take the winders out a couple of times to get them to fit perfect, but that is the way I am. Lots and lots of bad language and a good use of a knocking stick made it all the easier to manage. 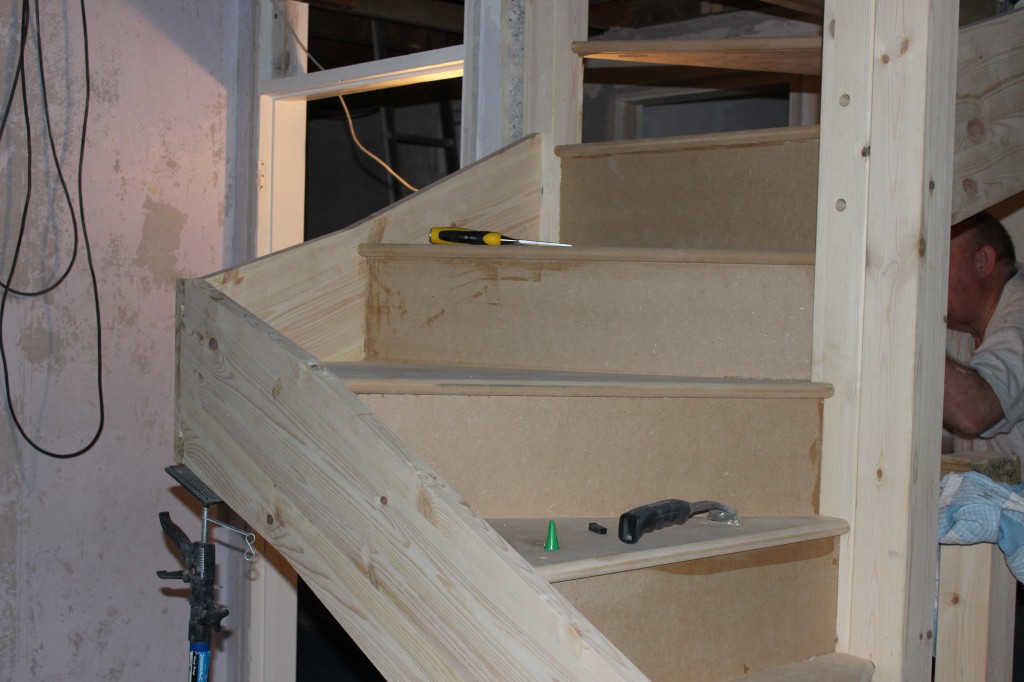 I was gluing the blocks on the back of the stairs, and the expanding glue kept popping them off so had to get some pins and start pinning them, but that was the only major problem but quickly solved. 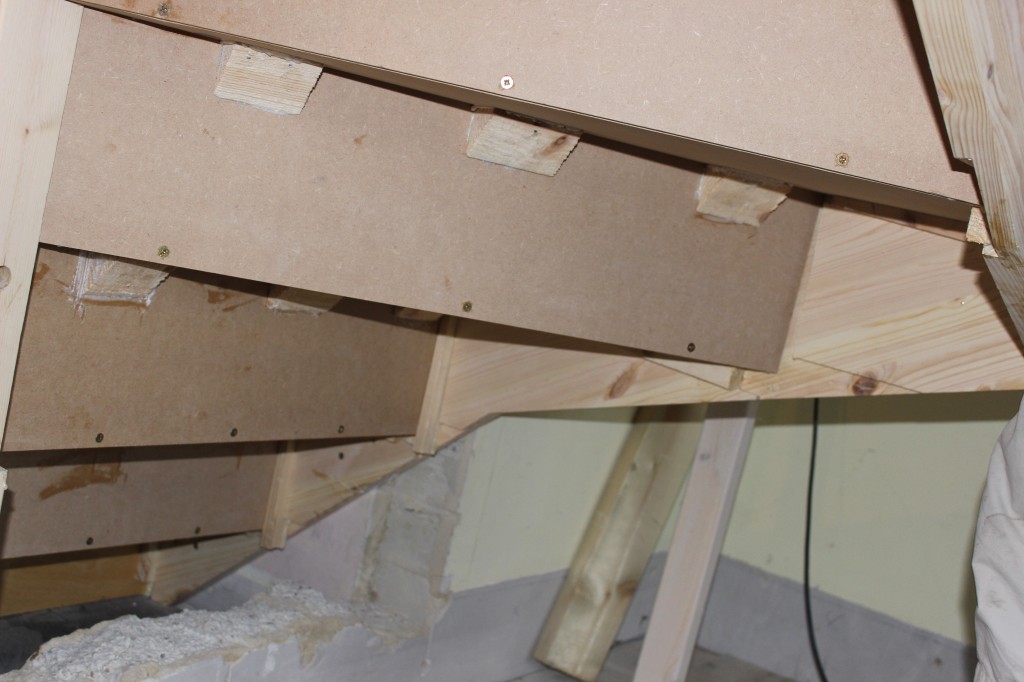 The stringers were getting tighter and more awkward the higher we got and getting them to line up was proving difficult but with a bit of help from Jane, we were plodding on.

By 21:30 we had just about finished and were quite pleased with the results. All I wanted to do was walk up them but there are a few more supports that need to go in, and the glue has to go off for 24 hours yet. So I will have to wait for that. 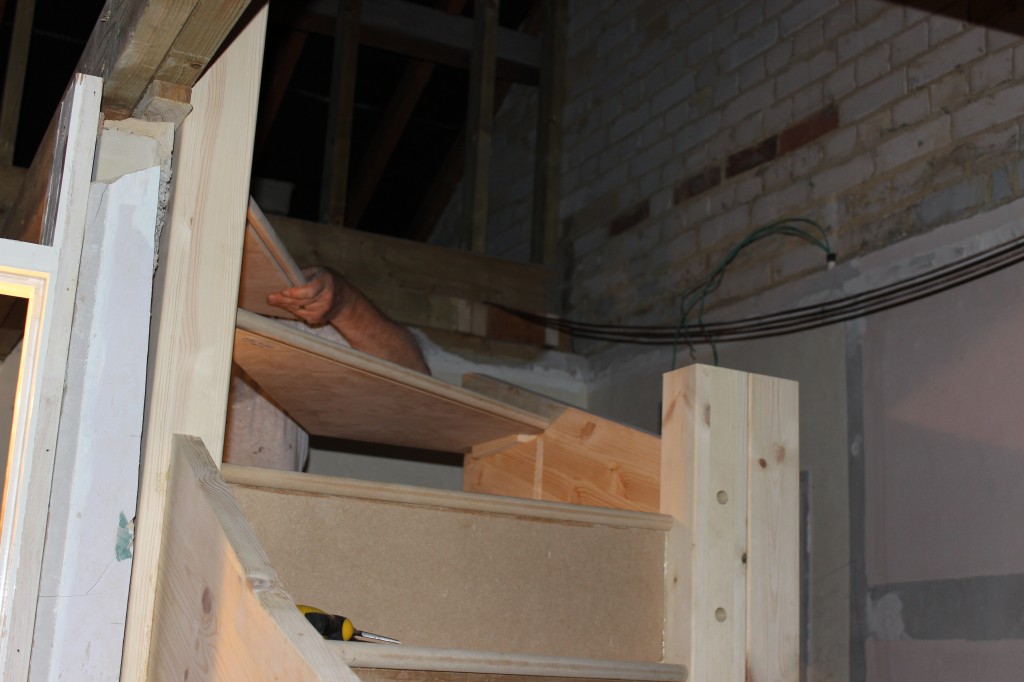 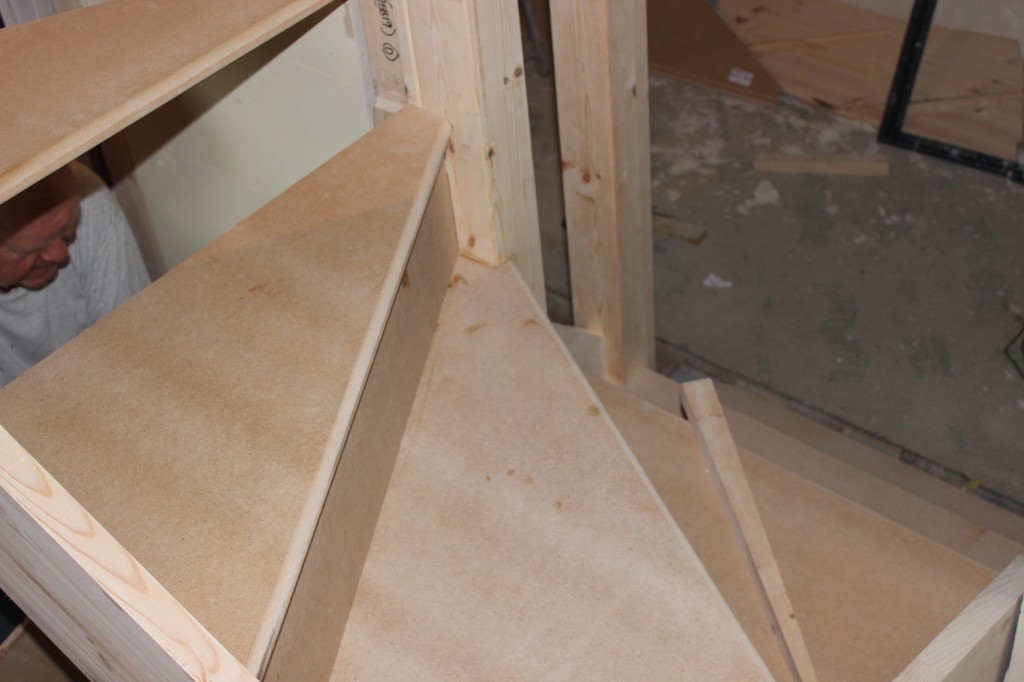 However, I think you will see from the photos how much work has gone into these stairs and yes two days to build them and do the drop landing, but we are not chippies and so taking our time was the right thing to do.

I went back on Sunday to start making pockets in the walls for the extra beams to take the other end of the drop landing, but a neighbour came around and pointed out it was Sunday and that her sister was not well or something so decided to stop for the day and come and right this. 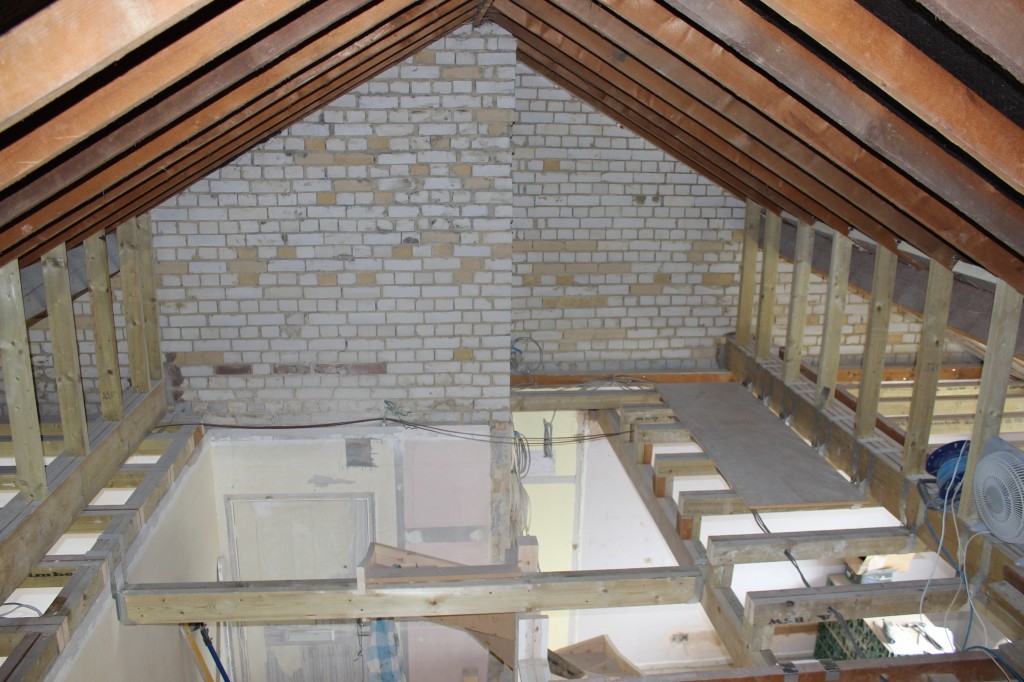 As you can see its slowly coming together, the electrics are starting to come back in now thanks to my father in law, and I am going to start building stud walls and finish insulating the ashlar walls along with sorting out the en suite bathroom and also the server room for the office. I also have a cupboard to build under the stairs in the bedroom.

Thanks again for reading and I hope you are enjoying watch and learn about how I am no doubt devaluing a property in a bid to get my office out of my living space.

The government is due to launch its £2 billion Green Homes Grant scheme in late September, which will enable homeowners to make savings on their energy bills while … END_OF_DOCUMENT_TOKEN_TO_BE_REPLACED

Working as a skilled tradesperson can offer several great benefits. You will have the opportunity to pursue something that you’re passionate about, have lots of job … END_OF_DOCUMENT_TOKEN_TO_BE_REPLACED

Makita UK has launched a new and improved collection of belts and pouches to its extensive and popular range of accessories. The newly designed range makes it even easier … END_OF_DOCUMENT_TOKEN_TO_BE_REPLACED

In a positive move for the future of skills and talent in the plastering industry, British Gypsum has announced that its Site Ready Skimming Course has been successfully … END_OF_DOCUMENT_TOKEN_TO_BE_REPLACED