After my day trip to the 100% Design show at Earls Court on Wednesday, I was all prepared and ready for the Professional Builder Tool Show which was being hosted at the Ricoh Arena which is in/near Coventry. I was staying at my parent’s home for a couple of nights so that I can save a few pennies and not have to stay in hotels, and it also gave me some more spending money on beer, which is always handy. 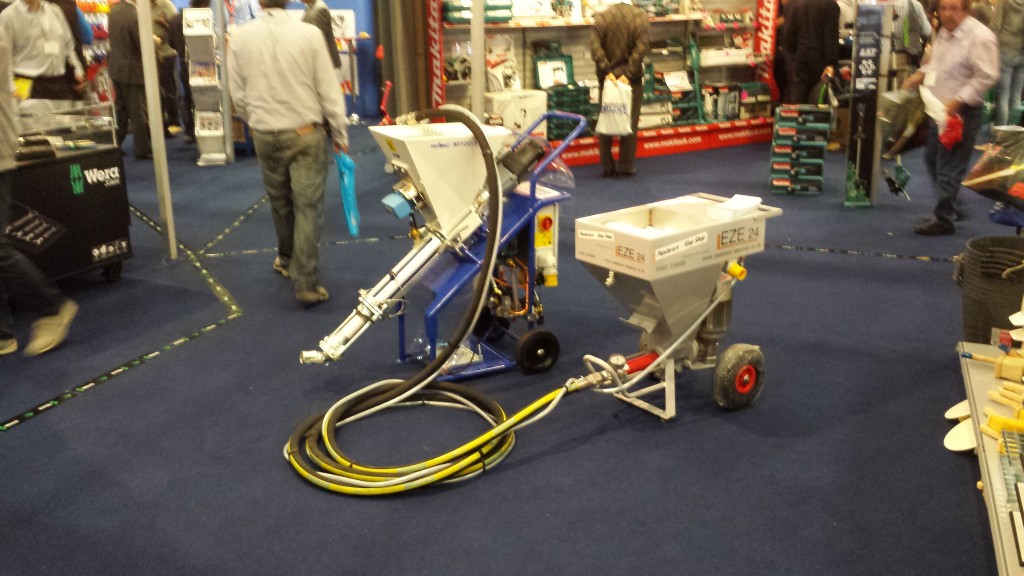 I arrived at the Professional Builder Tool Show at around 10am, and I was as ever dressed in my leathers so had the pleasure of peeling myself out of half a cow and get some smart(ish) clothes on and look presentable on The Plasterers 1 Stop Shop stand.

After the Manchester Pro Builder Tool Fair, I was a little sceptical as how busy this show was going to be, but as I arrived on the stand, and it was already full of people, which is a good sign. The Stand looked a whole lot better this time around as well which I think is going to help with sales and also the launch the Putz Tool range.

As you can see from the photo above Plasterers, 1 Stop Shop was also displaying a couple of machines as well, which attracted a lot of attention throughout Thursday. 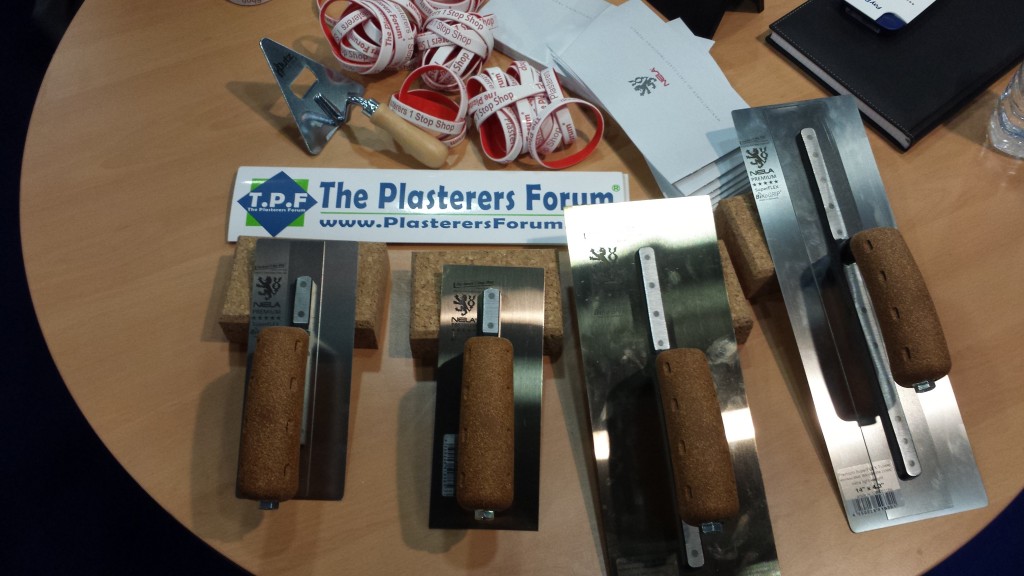 So what can I say about the day? Well, I met a lot of great plasterers, and we gave away special Plasterers Forum wristbands and Bumper stickers. Ryan from Plasterers Forum 1 Stop Shop had also put together a fantastic freebie bag of goodies that lots and lots of people picked, and we started to notice there were a lot of freebie hunters out there, and they would pick up anything whether they wanted it or not just as long as it was free but mind you have a look at one of the coolest bottle openers they were giving away… 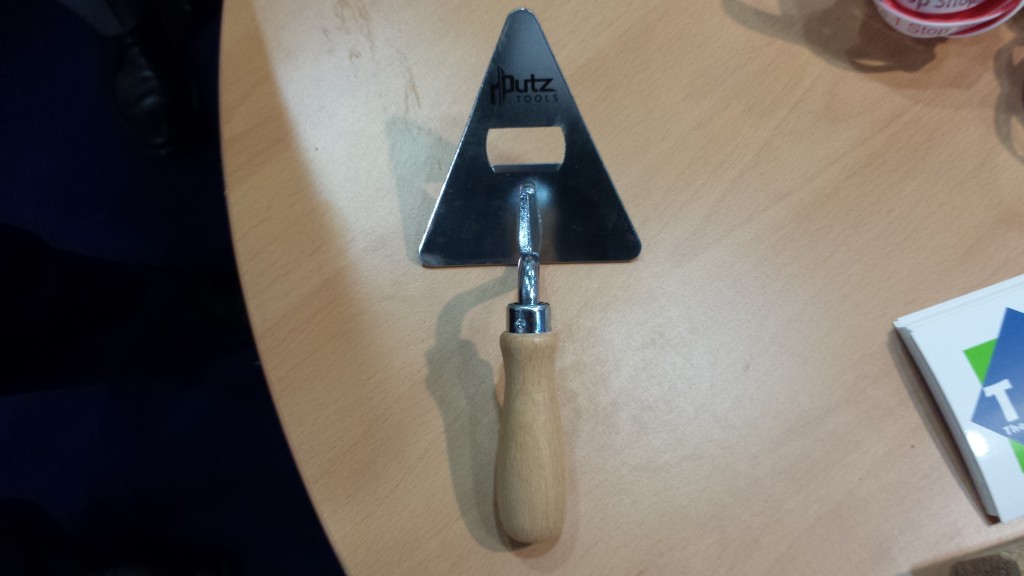 A lot of people that were excited about the Nela Trowels and also were loving the Putz Tool range which was launched earlier this month, and this were the first time that I have seen them in the flesh, and I have to say I am total love with the build quality of these tools.

I also think that Plasterers 1 Stop Shop has got some of the biggest tool names in the industry extremely scared with what they are producing and selling a boat load of. Plasterers are showing that they don’t want cheap tools, and they are happy to pay for quality and in all honestly the tools are very competitively priced. Have a look at these photos to simply whet your appetite. 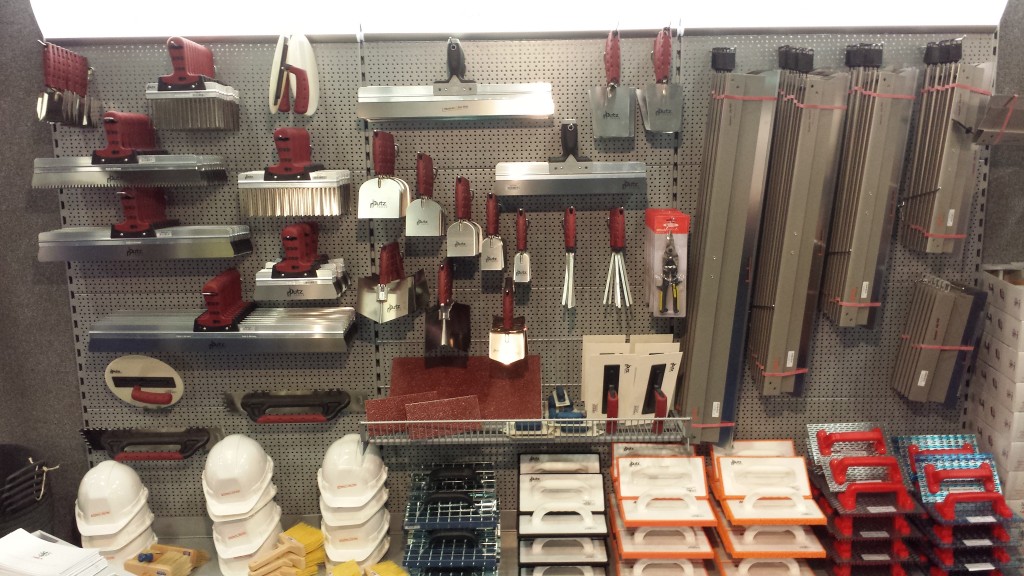 I also picked up a number of samples from companies for me to play with and give my opinion on and hopefully in the next few months you will be seeing how they are in real life as I really get stuck in on my renovation project. I am not going to mention what they are yet as I don’t want to spoil the surprise so you will have to wait and see what I have in store, but I am already impressed.

They day was over far too quick for me, and before I knew it, I was back in my half a cow and straddled over my Triumph and trundling down the motorway to Milton Keynes to see my parents for one last bed, a board and a few beers with a builder.

Thanks to everybody that came and visited us on the stand and thank to Ryan for putting up with me.

The government is due to launch its £2 billion Green Homes Grant scheme in late September, which will enable homeowners to make savings on their energy bills while … END_OF_DOCUMENT_TOKEN_TO_BE_REPLACED

Working as a skilled tradesperson can offer several great benefits. You will have the opportunity to pursue something that you’re passionate about, have lots of job … END_OF_DOCUMENT_TOKEN_TO_BE_REPLACED

Makita UK has launched a new and improved collection of belts and pouches to its extensive and popular range of accessories. The newly designed range makes it even easier … END_OF_DOCUMENT_TOKEN_TO_BE_REPLACED

In a positive move for the future of skills and talent in the plastering industry, British Gypsum has announced that its Site Ready Skimming Course has been successfully … END_OF_DOCUMENT_TOKEN_TO_BE_REPLACED