The latest trade survey carried out by the Federation of Master Builders shows continuing growth in nearly all of the sectors but almost half of the companies struggling to find the skilled labour that they need. 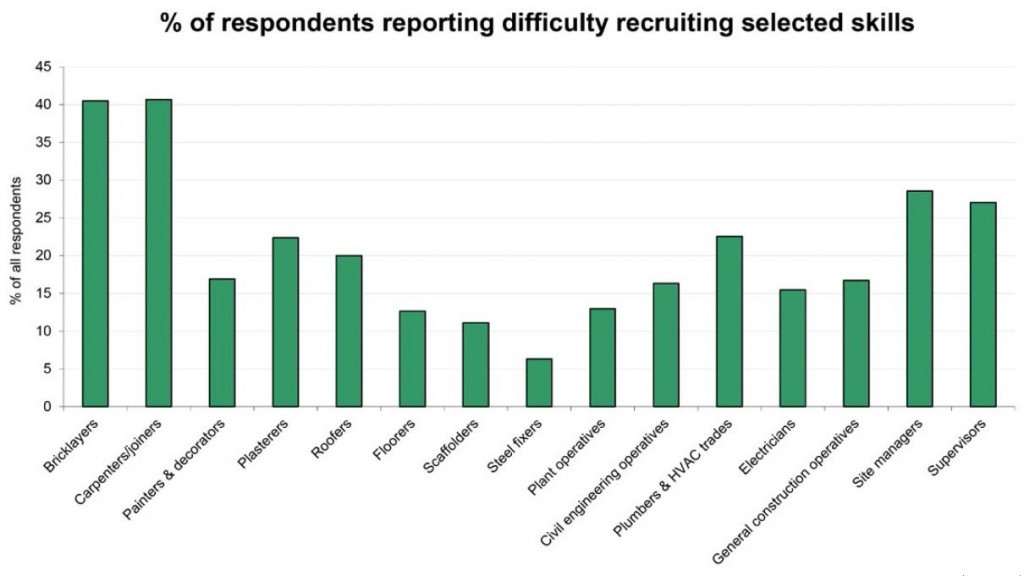 In the three months leading up to September 2014. The net balance for the overall workloads remained positive for the sixth quarter on the run. Only one 10th of the firms reported lower workloads which is down 14% three months earlier, while the number of respondents reporting high workloads was up from 40% to 44%.

41% of SMB member firms said they were having difficulty in finding bricklayers, carpenters/joiners. But also very interestingly is that they are struggling to find site managers, supervisors, plumbers and most importantly plasterers these all appear to be in short supply.

FMB chief executive Brian Berry said: “We are at last seeing strong, consistent growth in workloads for SME house-builders but the building industry is still a long way from being ‘home and dry’. The private housing market is recovering from a very low base after a recession which saw house building fall to record lows. Half of all SME house builders went to the wall or were forced to diversify into another area of construction.

“In the late 1980s, two-thirds of all new homes were built by small local builders but by 2010, this had dropped to just one third. Current statistics reveal that SME house builders now deliver only a quarter of all new homes. Since the recession hit, a major factor in this has been the serious difficulties SME house-builders experience in accessing bank finance, which show little sign of improving in the short term.”

Mr Berry concluded: “The threat of serious skills shortages is also becoming increasingly apparent. Our latest research shows 41% of SME construction firms are now reporting difficulties in recruiting bricklayers – an increase of 7% when compared to three months ago. Carpenters and joiners are also proving difficult to come by with 41% of firms reporting difficulties finding these tradesmen, an increase of 15% when compared to the second quarter of this year. The construction industry has lost 350,000 people since its peak before the recession and this will have a knock-on effect for many years to come. Although the SME sector has entered a period of sustained growth, the legacy of the most deep and protracted recession we have ever experienced has left us with a rocky road to genuine recovery.”

As you can tell this is excellent news for plasterers and also plumbers, as it means that there is demand for our skills, and this will hopefully encourage price back up to where they were before the recession took hold, which would make a lot of plasterers very happy.

The other thing to think about is it means everybody who is in college or learning to plaster has a future ahead of them as when the recession hit in 2008 2009 everyone was telling us that the industry is dead, plastering is dead, it is the end now, and as you can see from the graph above and the stats that this is very much not the case.

I will be very keen on seeing how this all pans out, and the effect it actually has within the plastering industry and also the training sector.

Thanks again spending time reading this Plasterers News™ article, and I look forward to reading your comments.

The government is due to launch its £2 billion Green Homes Grant scheme in late September, which will enable homeowners to make savings on their energy bills while … END_OF_DOCUMENT_TOKEN_TO_BE_REPLACED

Working as a skilled tradesperson can offer several great benefits. You will have the opportunity to pursue something that you’re passionate about, have lots of job … END_OF_DOCUMENT_TOKEN_TO_BE_REPLACED

Makita UK has launched a new and improved collection of belts and pouches to its extensive and popular range of accessories. The newly designed range makes it even easier … END_OF_DOCUMENT_TOKEN_TO_BE_REPLACED

In a positive move for the future of skills and talent in the plastering industry, British Gypsum has announced that its Site Ready Skimming Course has been successfully … END_OF_DOCUMENT_TOKEN_TO_BE_REPLACED