Used in both plasterboard and cement, gypsum is a key component of the construction industry. One of the key benefits of gypsum is sustainability, and the industry is increasingly being obliged to recycle gypsum due to closures in landfills and higher costs of tipping. Gypsum products are, in fact, indefinitely recyclable and keep their natural properties during repeated application. Efforts centred in Europe are focused on taking advantage of that recyclability to conserve resources and reduce energy consumption and landfill use, by increasing the portion of gypsum that is re-used. 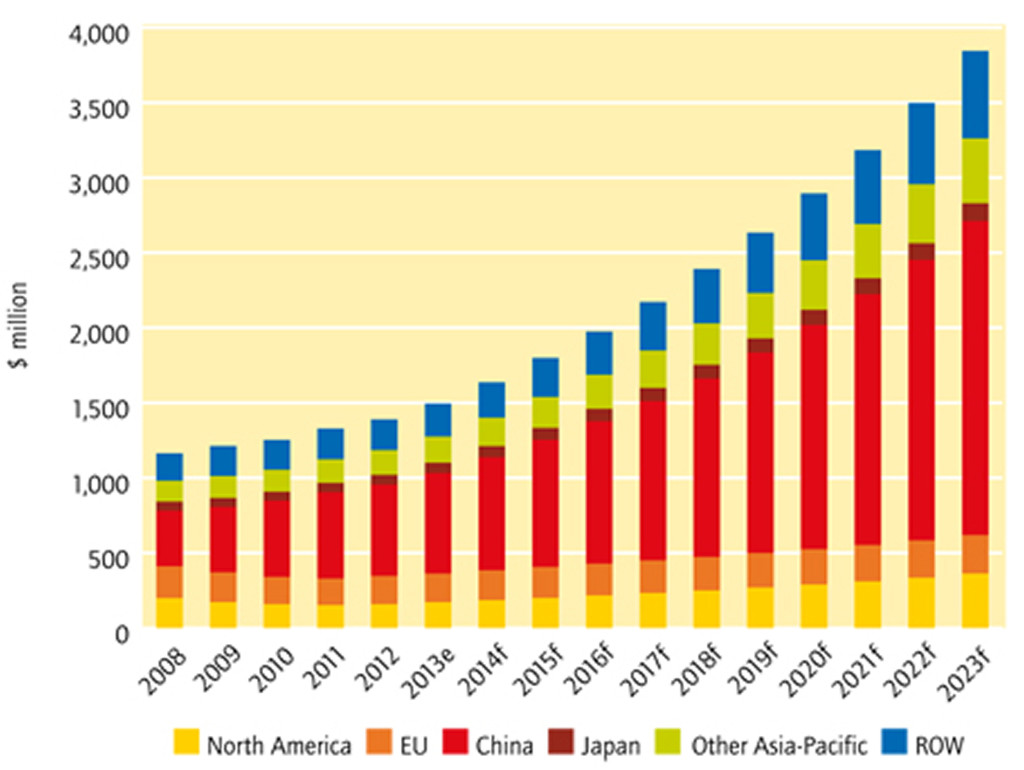 Gypsum factories are expected to toe the environmental line and not aggravate the neighbours or authorities in order to keep their ‘license to operate’. If they are too egregiously polluting they stand a chance of losing their license, and therefore their future profits and value to shareholders – which they are obliged by their fiduciary duty to avoid. In this new insight bulletin, Smithers Apex examines how the gypsum industry is being made to become more sustainable throughout the supply chain to remain profitable, focusing on extraction, recycling and manufacture.

Gypsum deposits are abundant and widespread, allowing for the use of locally mined gypsum in most regions and avoiding transport costs. Many modern plants are built next to coal-fired power stations which make gypsum as a by-product, and depending on the quality of the raw mineral, gypsum mining operations can be rehabilitated easily. Most gypsum mines are simply operations that dig up gypsum and crush it to size. Natural gypsum may be upgraded, usually by washing, to decrease the amount of clay in the rock.

By-product, or synthetic, gypsum is viewed as environmentally-friendly because it incorporates sulphur removed during flue gas desulfurization (FGD) at coal-fired power plants and other industrial sites. If the sulphur were not captured and used to produce by-product gypsum, it may end up as acid rain. Power plant operators should therefore adjust their processes to create saleable, pure FGD gypsum with few impurities such as calcium sulphide. The greater the use of FGD gypsum, the smaller the need for mined gypsum and the lower the environmental impact – meaning a maintained profit for gypsum factories.

Gypsum is often referred to as ‘eternally recyclable’, and due to pressure in the industry there has been a drastic increase in the recycling of gypsum.

Plaster that has been formed into a wall is essentially the same material that was dug out of the ground, just reconstituted, and that crushing and reconstitution can be repeated endlessly. Gypsum from gypsum boards and other products can usually be directly recycled in a plaster or plasterboard plant. The only requirement is an efficient process for recovering building waste. To this end, the EU now requires building waste to be separated and recovered, and an industry is emerging with the growth of companies that are dedicated to collecting and recycling it. Costs still tend to be higher for this form, but the alternative, sending it to a landfill, is an increasingly expensive option as taxes and other charges are imposed to discourage disposal. In some locations, gypsum recovered from building sites can be ground up for agricultural use as a soil conditioner.

Gypsum board and plaster products generally do well in life-cycle analyses. They have low in-place construction costs, require little routine maintenance and can be repaired easily. The US Gypsum Association claims that under normal conditions, the expected service life of gypsum products in construction is over 50 years.

Energy use during gypsum board manufacture is also improving considerably, and new plant designs incorporate energy efficiency while many older plants have been upgraded to be more energy efficient. Where feasible, natural gas is used for fuel to reduce carbon dioxide emissions and cogeneration of electricity or heat has been installed at some plants. Gypsum has a much lower calcining temperature than cement, and thus requires a much lower energy input. The cement industry, in contrast, is seen as a very large generator of carbon dioxide, due to its decarbonation of limestone.

Gypsum contains crystal-bound water, which makes it a natural fire retardant. Water can be recycled in plasterboard manufacturing facilities, and in fact some plants are considered virtually self-sustaining with respect to water consumption. Gypsum board, in particular when insulating material is sandwiched between two gypsum boards, offers good thermal and acoustic insulation in structures.

For more information on the future of sustainability in the gypsum market, see Smithers Apex’s market report entitled The Future of Gypsum: Market Forecasts to 2023.

The government is due to launch its £2 billion Green Homes Grant scheme in late September, which will enable homeowners to make savings on their energy bills while … END_OF_DOCUMENT_TOKEN_TO_BE_REPLACED

Working as a skilled tradesperson can offer several great benefits. You will have the opportunity to pursue something that you’re passionate about, have lots of job … END_OF_DOCUMENT_TOKEN_TO_BE_REPLACED

Makita UK has launched a new and improved collection of belts and pouches to its extensive and popular range of accessories. The newly designed range makes it even easier … END_OF_DOCUMENT_TOKEN_TO_BE_REPLACED

In a positive move for the future of skills and talent in the plastering industry, British Gypsum has announced that its Site Ready Skimming Course has been successfully … END_OF_DOCUMENT_TOKEN_TO_BE_REPLACED