Dulux Trade has unveiled the regional winners of this year’s hotly contested Most Trusted Decorator competition, after receiving over 700 nominations from across the UK. 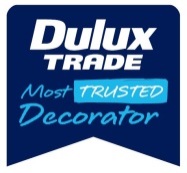 As part of its campaign to find the UK’s most trustworthy decorator, Dulux Trade asked homeowners to nominate dedicated painters who they believe go the extra mile to earn their trust. The paint manufacturer selected the top decorators from 10 regions who will now go on to compete in the national final in November.

In recognition of their achievement, each finalist will receive one year’s free Dulux Select Decorator membership, along with a trophy to mark their regional title. They will also go on to the final stage of the competition to meet an independent panel of industry judges, and have the chance to be declared as the UK’s Most Trusted Decorator and win free fuel for a year.*

The Most Trusted Decorator competition was set up by Dulux Trade as part of a long-term commitment to support the sector and recognise the UK’s most dependable decorators and perfectionist painters. John Staunton, Customer Marketing Manager, Commercial Market, at Dulux Trade, explained: “Once again, we were overwhelmed by the number of nominations we received from satisfied customers. This competition really highlights the hard work of the decorators across the UK who work with pride, passion and professionalism.”

The government is due to launch its £2 billion Green Homes Grant scheme in late September, which will enable homeowners to make savings on their energy bills while … END_OF_DOCUMENT_TOKEN_TO_BE_REPLACED

Working as a skilled tradesperson can offer several great benefits. You will have the opportunity to pursue something that you’re passionate about, have lots of job … END_OF_DOCUMENT_TOKEN_TO_BE_REPLACED

Makita UK has launched a new and improved collection of belts and pouches to its extensive and popular range of accessories. The newly designed range makes it even easier … END_OF_DOCUMENT_TOKEN_TO_BE_REPLACED

In a positive move for the future of skills and talent in the plastering industry, British Gypsum has announced that its Site Ready Skimming Course has been successfully … END_OF_DOCUMENT_TOKEN_TO_BE_REPLACED