The 27th of May was the last of the Plasterers Forum® mine tour events with British Gypsum for this year, well for now, we may just organise another one later in the year, but we don’t have anything planned as yet.

I got to my hotel and started watching the Isle of Man TT, and that’s the last thing that I remember before my Alarm flew into the most ear piercing siren but still none the less I was awake and ready to get to the British Gypsum Headquarters. As I expected it would be it was raining, and so I had a gentle ride in and finally, I was in the car park and reversing my bike into a space. Yes, I said reversing, British Gypsum has lots of rules for health and safety and one of them is that you have to reverse into your parking space.

I was greeted by all the members who were coming and after a quick introduction and hellos, the banter started and the characters started to grin through, and I knew it was going to be a lively day. I spent the next 20 minutes trying to get out of wet weather gear and start looking presentable while trying to make sure I say hello to everybody and look like I was not getting flustered.

The first part of the British Gypsum mine tour is getting breakfast and there were bacon butty’s and egg butty’s and these went down a treat with everybody and thanks to the kitchen team that made this happen and put up with my constant questions on ingredients. This time gave the 15 members of The Plasterers Forum to interact and chat between each other and generally put names to faces.

With this mine tour there were a few difficulties with the mine, and the group had to be split up into 2 and although this was not ideal, it is what needed to be done and the group was split. I decided to spend the day at the training academy, and this meant I was not going to be over at barrow at all except for lunch, but I have done the mine before, and I was quite keen on seeing the members and have the opportunity to catch up with them and generally get their opinions on the materials that they are going to be testing and playing with.
Both groups did the same, so I will talk about the training academy as a whole rather than each group.

The first thing that was talked about and applied was the Magnetic plaster and with lots of questions on how to apply and what’s its uses are and generally, the groups getting stuck in with ideas on how and where they could use it. It was quite inspiring to see their imaginations run away and come up with great ways to promote magnetic plaster and in places that may be interested in using it. 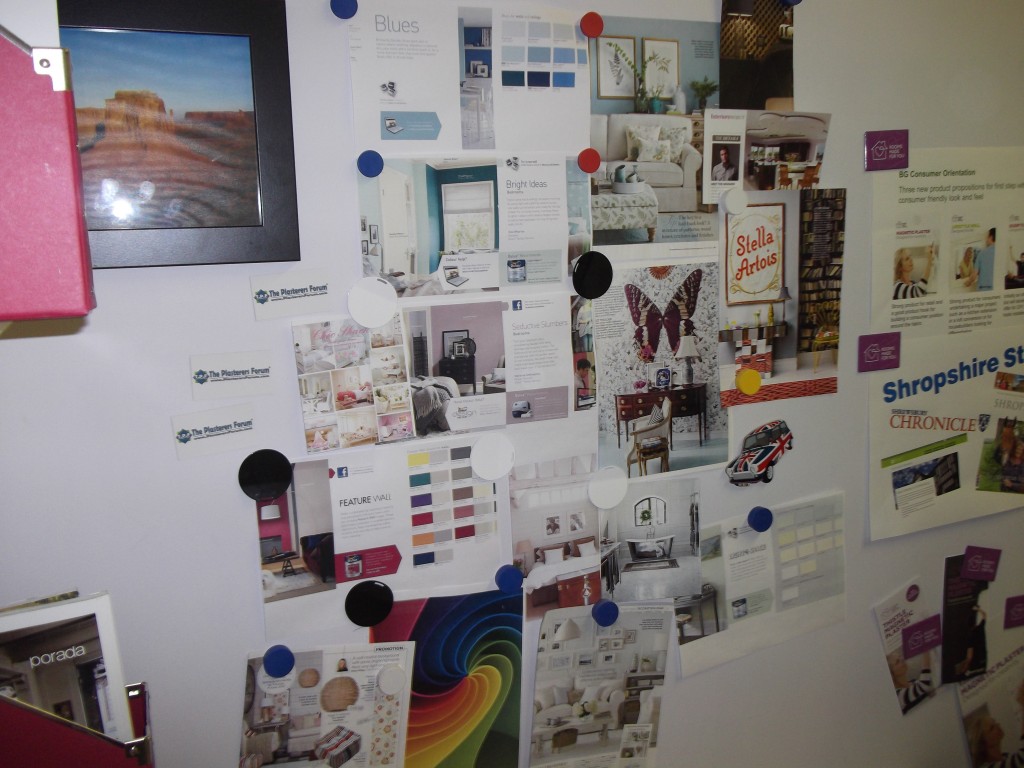 So once all the questions had been answered the chaps Joe and Paul got to mixing up some magnetic plaster as we all watched and took the mick 🙂 What would you expect? It’s The Plasterers Forum® day out…. 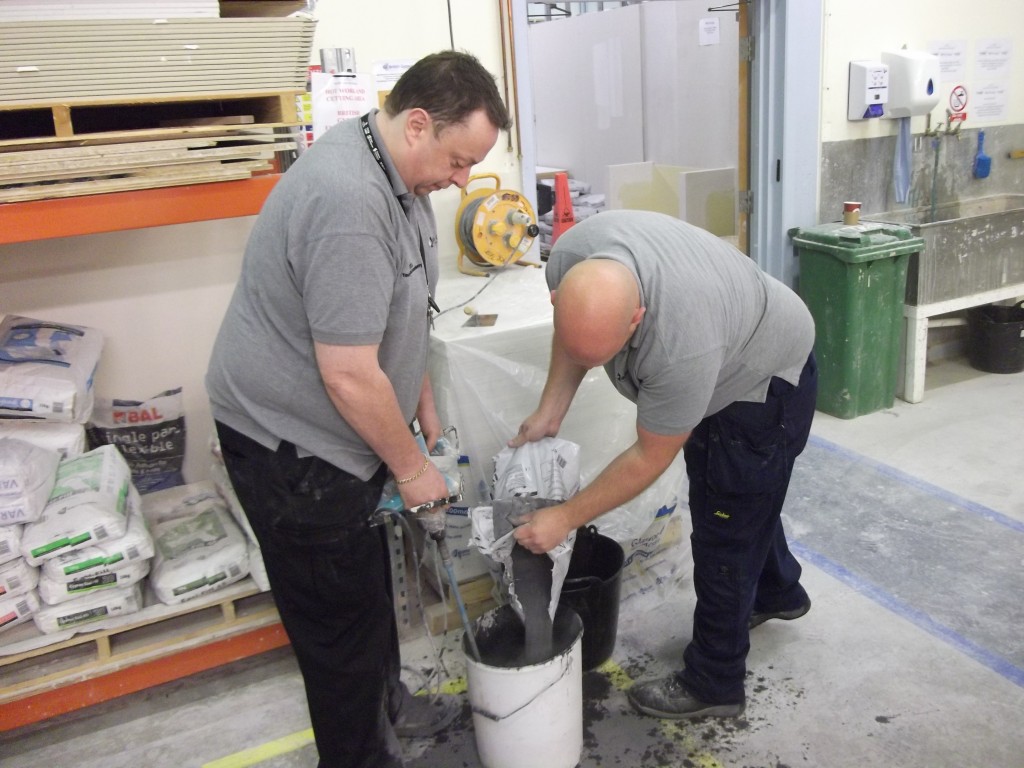 Yes, magnetic plaster is black, black as the night!!

Once it was mixed up, the members got the chance to apply it and see what it is like to use and generally get to grips with it, this is what the day is about and than is using it and getting your questions answered directly from the people who make it and use it regularly. 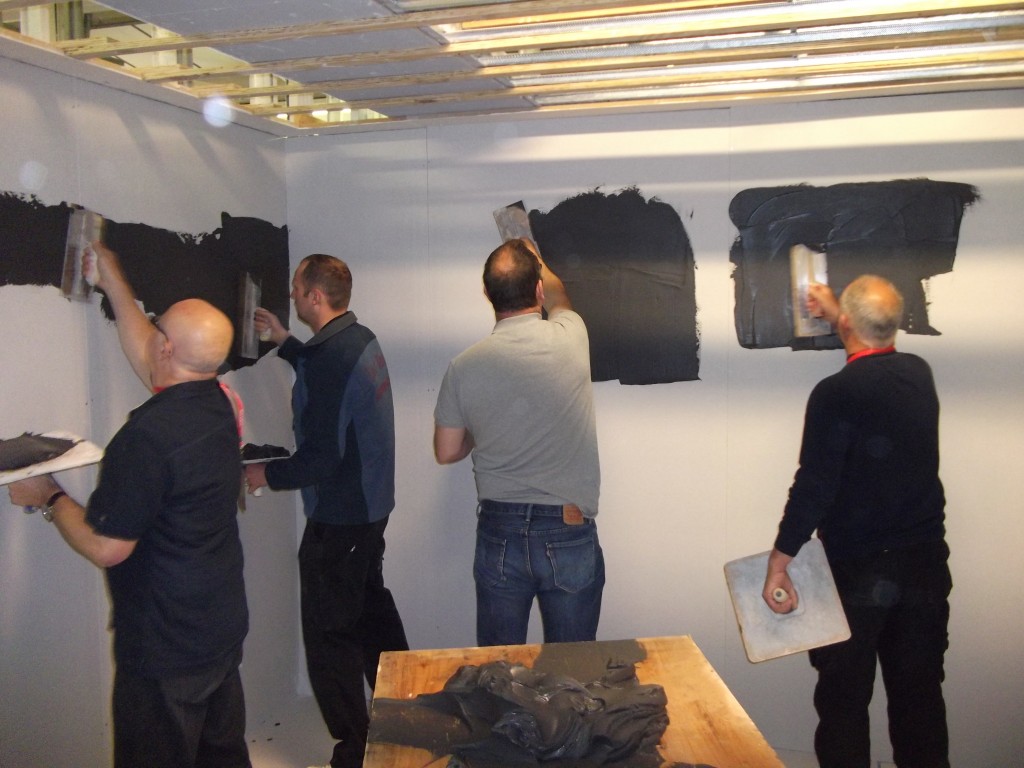 Once we had finished applying the magnet the next product to have a play with was the Activ Air pure finish, which you can find out more about Pure Finish here the way I understand is that basically it cleans the air. It’s a plaster that will be targeted to hospitals and doctor’s surgeries and anywhere else where having a clean sterile environment is going to be needed. The members liked using it and commented that it was a bit creamier than multi finish but was still very nice to use but thought it was more of a specialist product and for the general domestic jobs, it was not something that was going to get used as much. 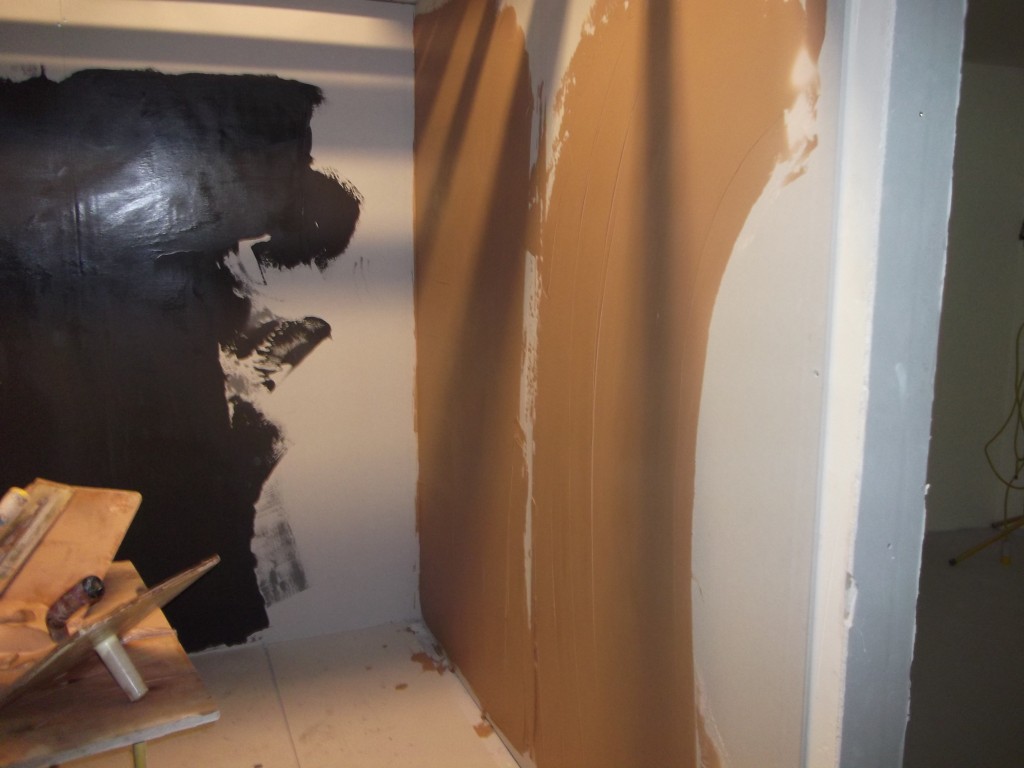 The next product to get used is a product that has caused a lot of controversy all over the internet and was recalled last year but British Gypsum are now looking at re-launching and have been using The Plasterers Forum® to get product testers to see how the new product goes and if it stays on the wall… Yes you guessed it… Thistle Uni Finish!! 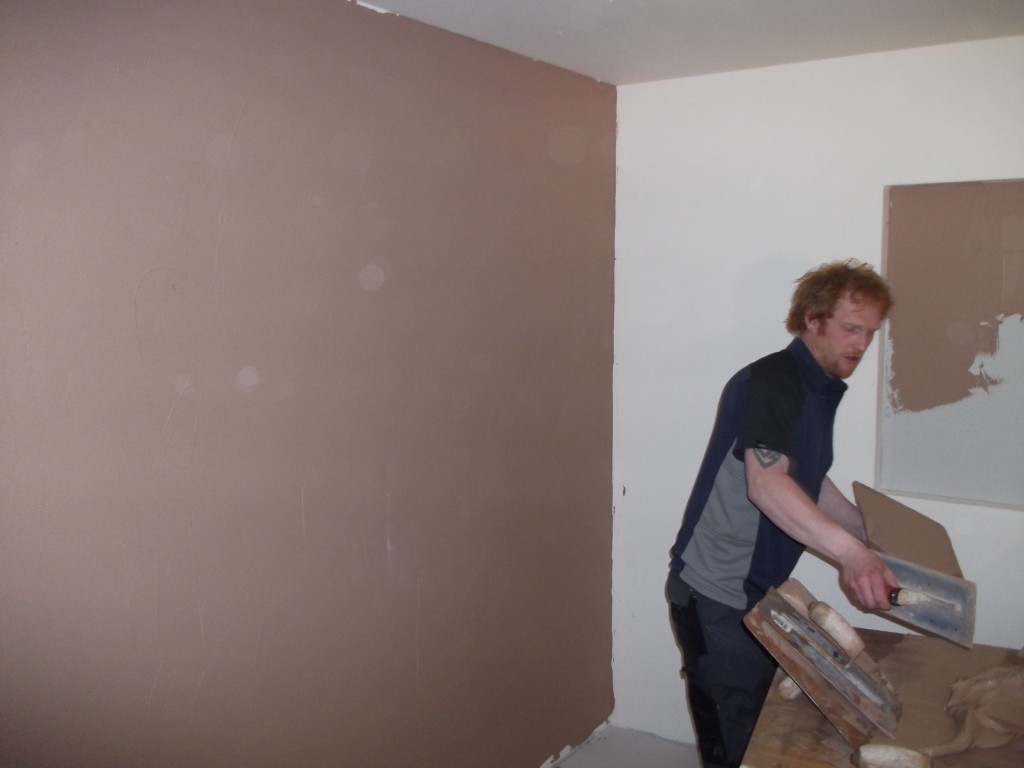 Thistle Uni Finish has been developed to eradicate the need of applying PVA or any kind of glue to walls and ceilings prior to plastering and so you can go straight over surfaces like paint, artex and what not without having to get your roller out of the van. The topic of UNi FIsh became a big deal on The Plasterers Forum® and created lots of chatter and the idea is great I think with the new formula of Uni finish and it really is going to be a great product for the domestic market. We will be do a feature on it very very soon and i have a case study that I will be personally doing to put it through its paces and show you what it can do and what it can get over. If you want to know more about Uni FInish then please keep a close eye on The Plasterers Forum® and also over here on Plasterers News. 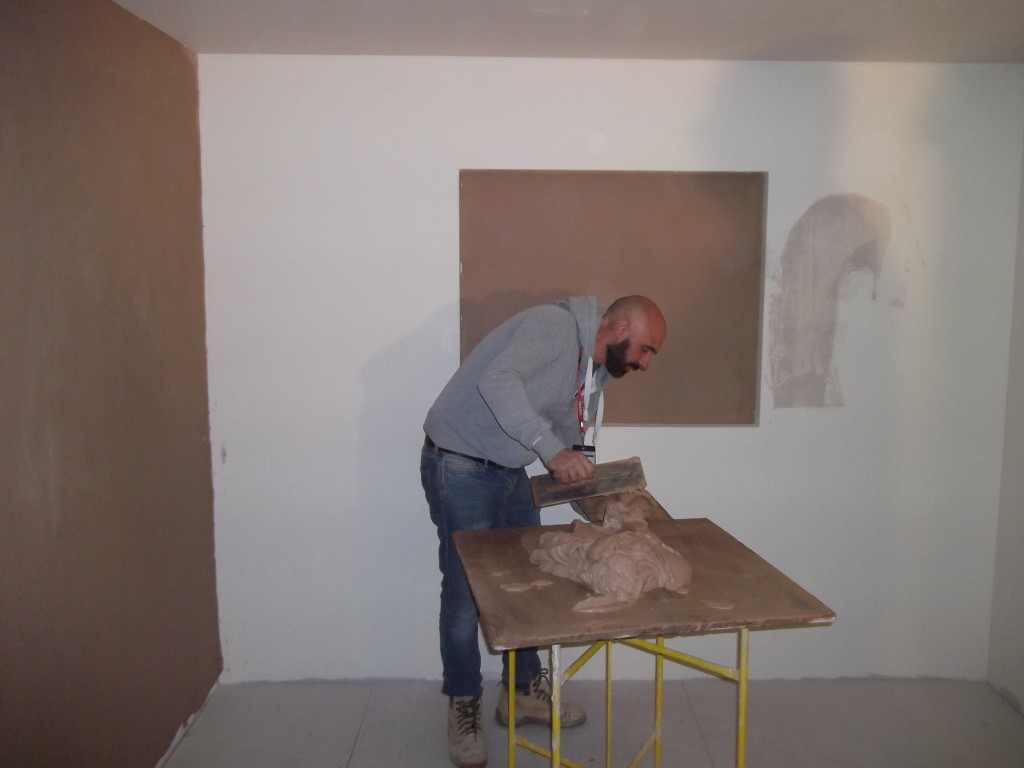 I have been caught using Thistle Uni Finish as well, I decided to give the members a little glimpse into the fact that use to be on the tools as well and so a few hawk/handboard fulls were slid up the wall 🙂 While they all looked in horror and took photos… thanks chaps… 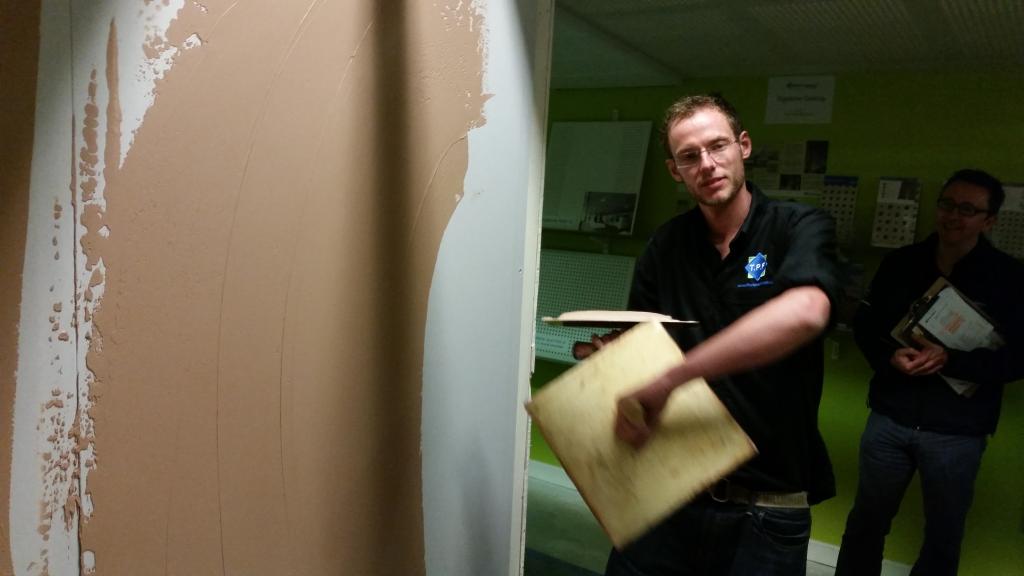 The groups got to finish and see the end results of the finish, and the feedback has been excellent, and they are all confident that magnetic plaster will become a valuable add-on to their businesses when they get the word out about it.

The next part of the British Gypsum day was the mine tour and the factory tour. This part of the trip always blows the member’s minds it did me when I first did it, and I have to say I love seeing and chatting the guys after they have been down the mine as they are buzzing and its great to see.

I did not get down there this time as I wanted to spend the time in the academy and play with the new plasters. However, the general gist of the day is that you go down the mine in Land Rover, and you see the whole process of what goes on to get gypsum out of the ground and how they get it to the surface. 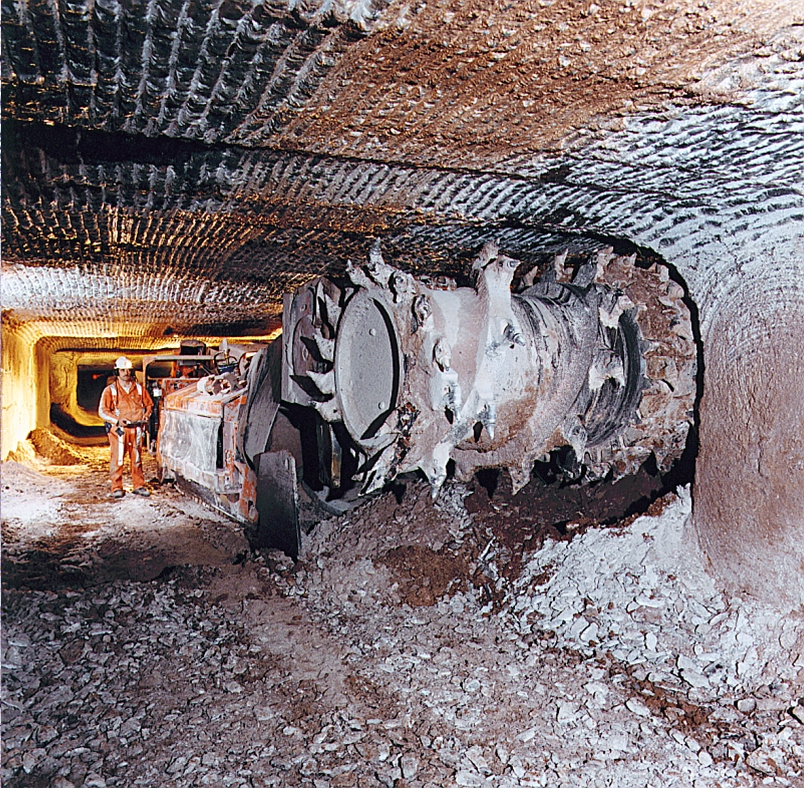 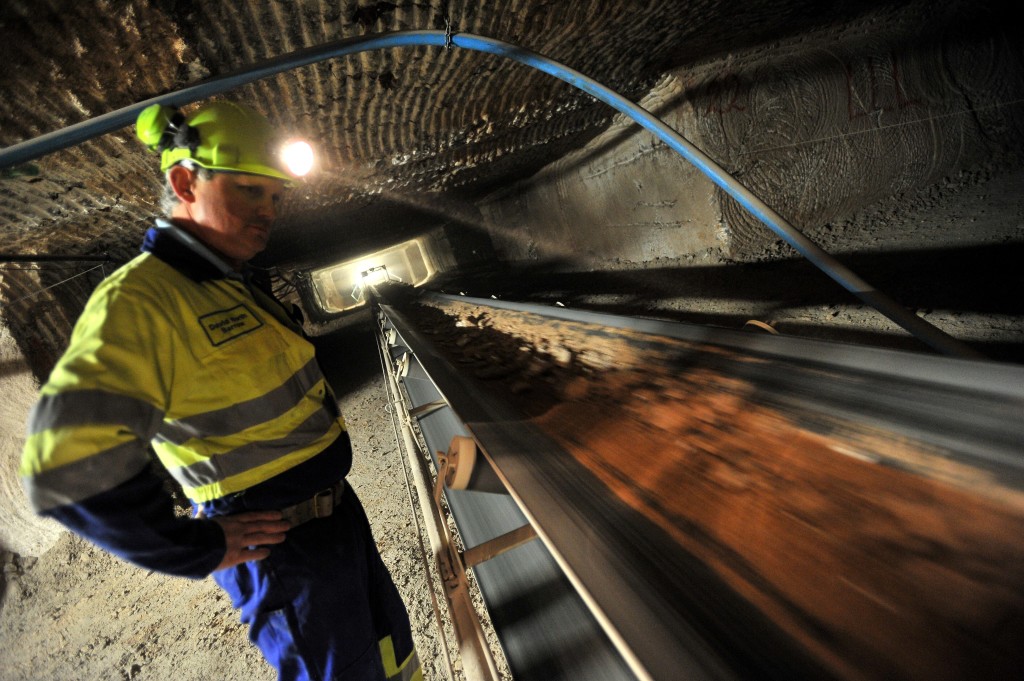 We don’t have any pictures ourselves of when the members were down the mine as there is a huge safety issue with anything that uses batteries, but the pictures above should give you a good idea on what the members got to see.

Once the mine tour is complete you do a surface tour where you get to see the entire process of the gypsum coming out of the ground and all the way through to it being bagged and then loaded on to the delivery lorries, and in this whole time not one human hand has touched the product. In fact, the first person to touch it is at your merchants. 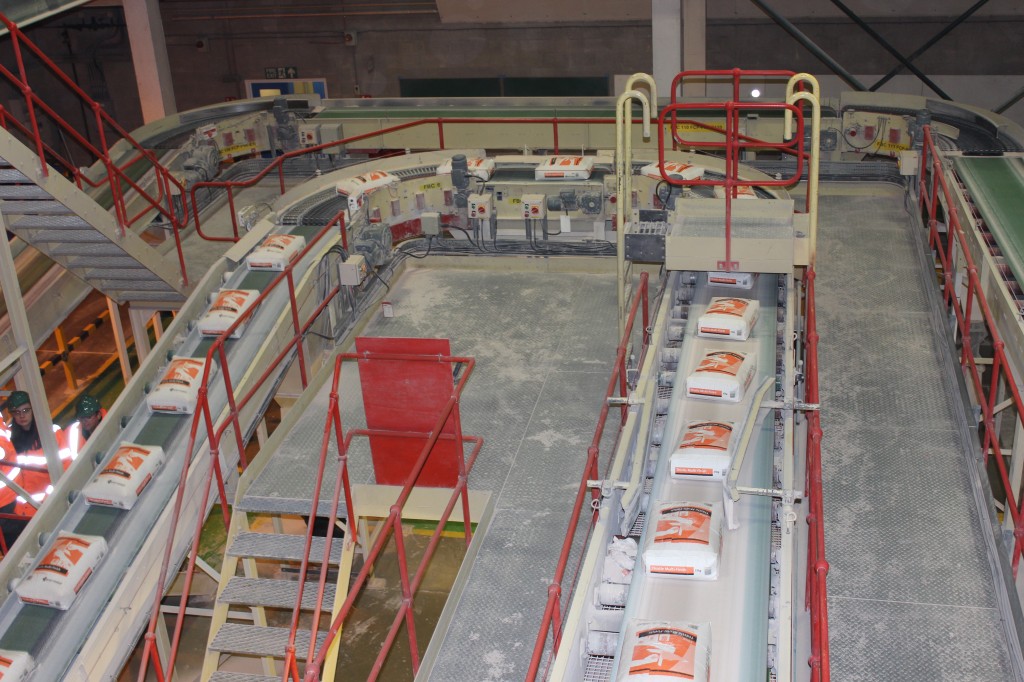 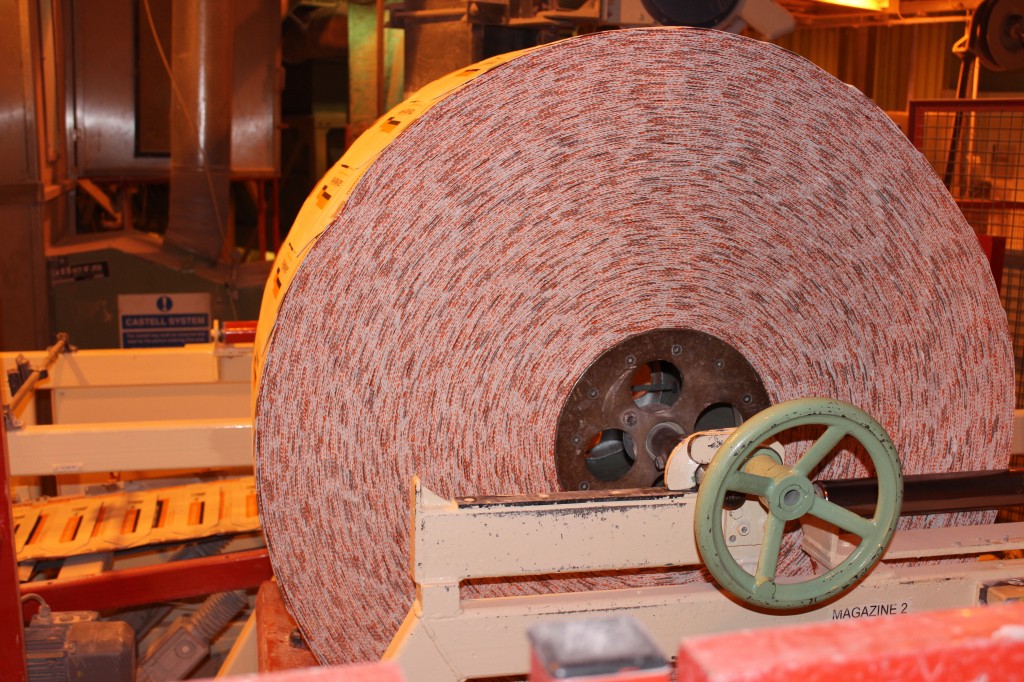 There is so much to take in when going around British Gypsum all the equipment the science, the detail and the passion that is so obvious every member of staff is interested in what the members have to say, and that is what I love about the tours. We are soo looked after with breakfast lunch and hot drinks throughout the day and the opportunity to take a couple of bags of plaster away at the end of the day is always a bonus, and I love seeing what those bags get up to over the weeks after the tours.

The other thing about the tours is that people travel far and wide to get there and the night after the tour the forum is alive with chatter while the people who stay in a hotel are out in Loughborough enjoying local drinks and food. We put the industry to rights we discuss everything and compare projects and funny stories. It’s like a big family and The Plasterers Forum® is more than just a plastering community, and we all stick together and are constantly working to improve the trade.

The Plasterers Forum® love doing these days out for its members, and they would not have been possible without British Gypsum, So I would like to thank everybody at British Gypsum for your continued support of our ever growing community, and we are looking forward to seeing you all again.

The government is due to launch its £2 billion Green Homes Grant scheme in late September, which will enable homeowners to make savings on their energy bills while … END_OF_DOCUMENT_TOKEN_TO_BE_REPLACED

Working as a skilled tradesperson can offer several great benefits. You will have the opportunity to pursue something that you’re passionate about, have lots of job … END_OF_DOCUMENT_TOKEN_TO_BE_REPLACED

Makita UK has launched a new and improved collection of belts and pouches to its extensive and popular range of accessories. The newly designed range makes it even easier … END_OF_DOCUMENT_TOKEN_TO_BE_REPLACED

In a positive move for the future of skills and talent in the plastering industry, British Gypsum has announced that its Site Ready Skimming Course has been successfully … END_OF_DOCUMENT_TOKEN_TO_BE_REPLACED