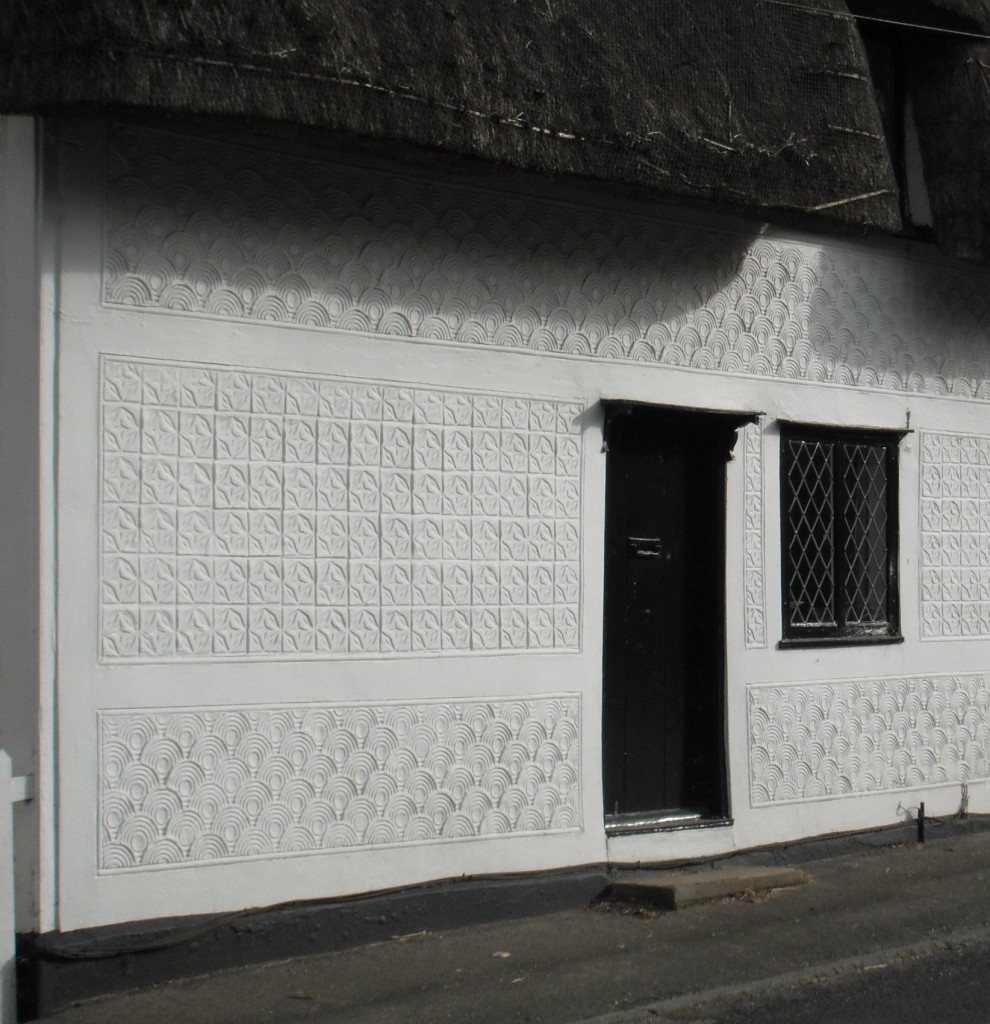 In East Anglia any lime plaster which is earlier than about 1850 will use chalk as the aggregate. Chalk bonds really well with lime perhaps because it is chemically very closely related and makes a mortar which is like clay in consistency so it is excellent for modelling. Chalk went out of fashion in East Anglia after about 1850 perhaps because cement became more common and perhaps because tradesmen started to go to technical college and learn the ‘correct’ mixes. During the last ten years in Suffolk, chalk has started to become the aggregate of choice for plastering timber framed buildings and for pargeting, with Anglia Lime at the forefront promoting its use once again. 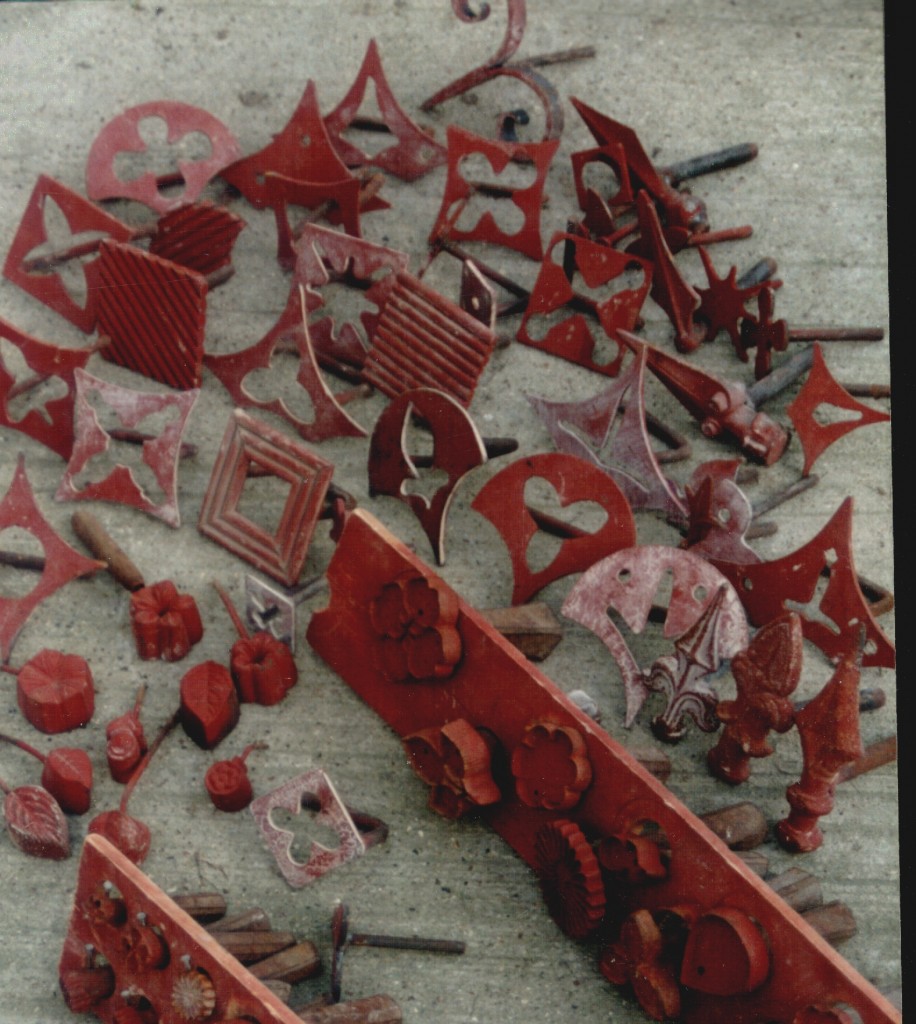 The other important ingredient is fibre. Traditionally it was probably cow or horse hair but BSE stopped them being used and imported goat and yak hair became popular. There has recently been concern about hair dissolving in the wet mortar, which could be due to bad site practice or could be due to the imported hair being stripped of its protective oils, so to be on the safe side unless it is a conservation job I have started to use synthetic fibres instead. Traditional lime/chalk/hair mortar contains loads of hair so it becomes less like a mortar and more like a stuck together mat, which is ideal for use on timber frame buildings which tend to move around with the seasons. Modelled parget contains plenty of fibre too, but combed designs are marked into a thin top coat of fibreless mortar otherwise the fibre would get caught up in the comb.

The simplest parget design is a rectangular panel which is spaced six inches away from each window and door. The edge of the panel is incised into the wet plaster using a simple thumb mould of wood or metal which is run against a straight edge held in place by hand. The shape is usually a simple half round but the Victorians liked more elaborate designs. The panel is often infilled with a repetitive design which might be combed with a piece of old saw blade or stamped with a purpose made wooden stamp.

Popular repeat patterns to put inside a frame are zigzag, fan and basket weave. Early zigzags tend to be more random than recent ones which are often in neat rows. Another pattern called wool skein is S shapes on their sides and twisted round at the end. Wool skein is a pattern which needs to be tidy to look good and so it is a good idea to mark out the space with a series of dots. A piece of wood with nails driven into it is good way to do this. Another simple but effective pattern called sparrow picking is formed by jabbing the surface with the end of a small bunch of twigs. 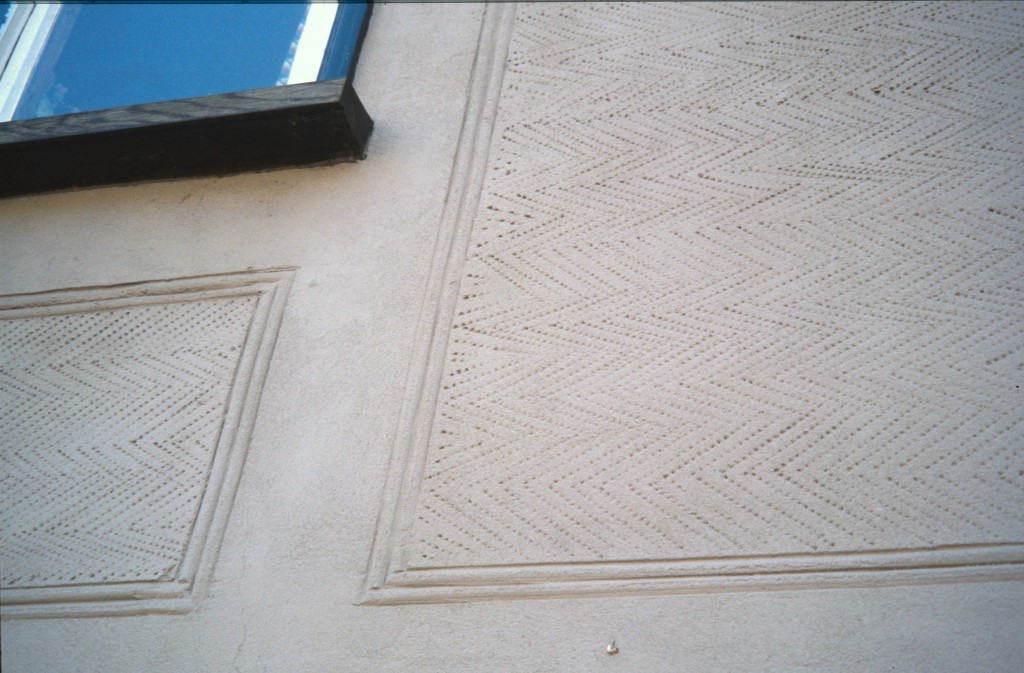 Sand cement render has been successfully used for creating both combed and stamped pargets.

This article and the other pargeting articles were kindly written by Anna Kettle please make sure you drop past and take a look at her site www.kettlenet.co.uk as well as her facebook page Facebook: Anna Kettle Pargeting.

I hope you have enjoy reading and if you have any questions or any topics you would like PLasterers News to cover then please do get in touch with us.

The government is due to launch its £2 billion Green Homes Grant scheme in late September, which will enable homeowners to make savings on their energy bills while … END_OF_DOCUMENT_TOKEN_TO_BE_REPLACED

Working as a skilled tradesperson can offer several great benefits. You will have the opportunity to pursue something that you’re passionate about, have lots of job … END_OF_DOCUMENT_TOKEN_TO_BE_REPLACED

Makita UK has launched a new and improved collection of belts and pouches to its extensive and popular range of accessories. The newly designed range makes it even easier … END_OF_DOCUMENT_TOKEN_TO_BE_REPLACED

In a positive move for the future of skills and talent in the plastering industry, British Gypsum has announced that its Site Ready Skimming Course has been successfully … END_OF_DOCUMENT_TOKEN_TO_BE_REPLACED