Jewson employees from across the Midlands recently embarked on a hike to the summit of Scafell Pike to raise more than £5,000 for Macmillan Cancer Support. 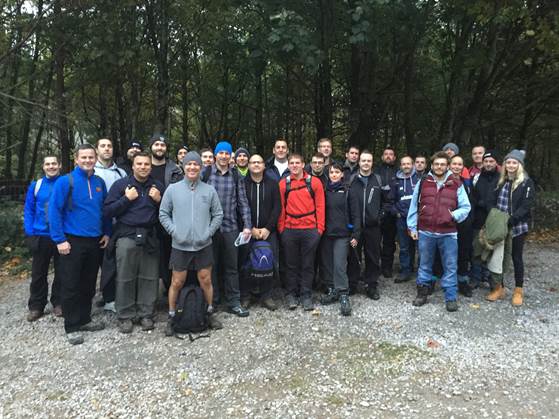 The team of 28 colleagues joined forces from 23 branches across five counties, Northamptonshire, Leicestershire, Cambridgeshire, Warwickshire and Lincolnshire, in order to raise money for the charity and increase awareness of the Fit4Life day – an initiative used in conjunction with AXA PPP to encourage colleagues to live a healthier lifestyle.

The team comprised mixed ages and abilities, including seasoned walkers and others who took part in regular training to prepare for the challenge. The group battled varied, and often difficult weather conditions to reach the summit in under three hours.

Bob Kirkland, Area Director at Jewson, said: “Scafell Pike is the highest mountain in England, standing at 978 metres above sea level, so it was a fantastic achievement for all of the team to have completed the challenge.

“I’d like to say a special thank you to our local suppliers, Grono and GRS, for helping the team to raise so much money for a fantastic cause.”

The team was accompanied by two representatives from Grono, who brought with them an artificial grass display of the word ‘Macmillan’, which the team displayed at the summit.

The government is due to launch its £2 billion Green Homes Grant scheme in late September, which will enable homeowners to make savings on their energy bills while … END_OF_DOCUMENT_TOKEN_TO_BE_REPLACED

Working as a skilled tradesperson can offer several great benefits. You will have the opportunity to pursue something that you’re passionate about, have lots of job … END_OF_DOCUMENT_TOKEN_TO_BE_REPLACED

Makita UK has launched a new and improved collection of belts and pouches to its extensive and popular range of accessories. The newly designed range makes it even easier … END_OF_DOCUMENT_TOKEN_TO_BE_REPLACED

In a positive move for the future of skills and talent in the plastering industry, British Gypsum has announced that its Site Ready Skimming Course has been successfully … END_OF_DOCUMENT_TOKEN_TO_BE_REPLACED