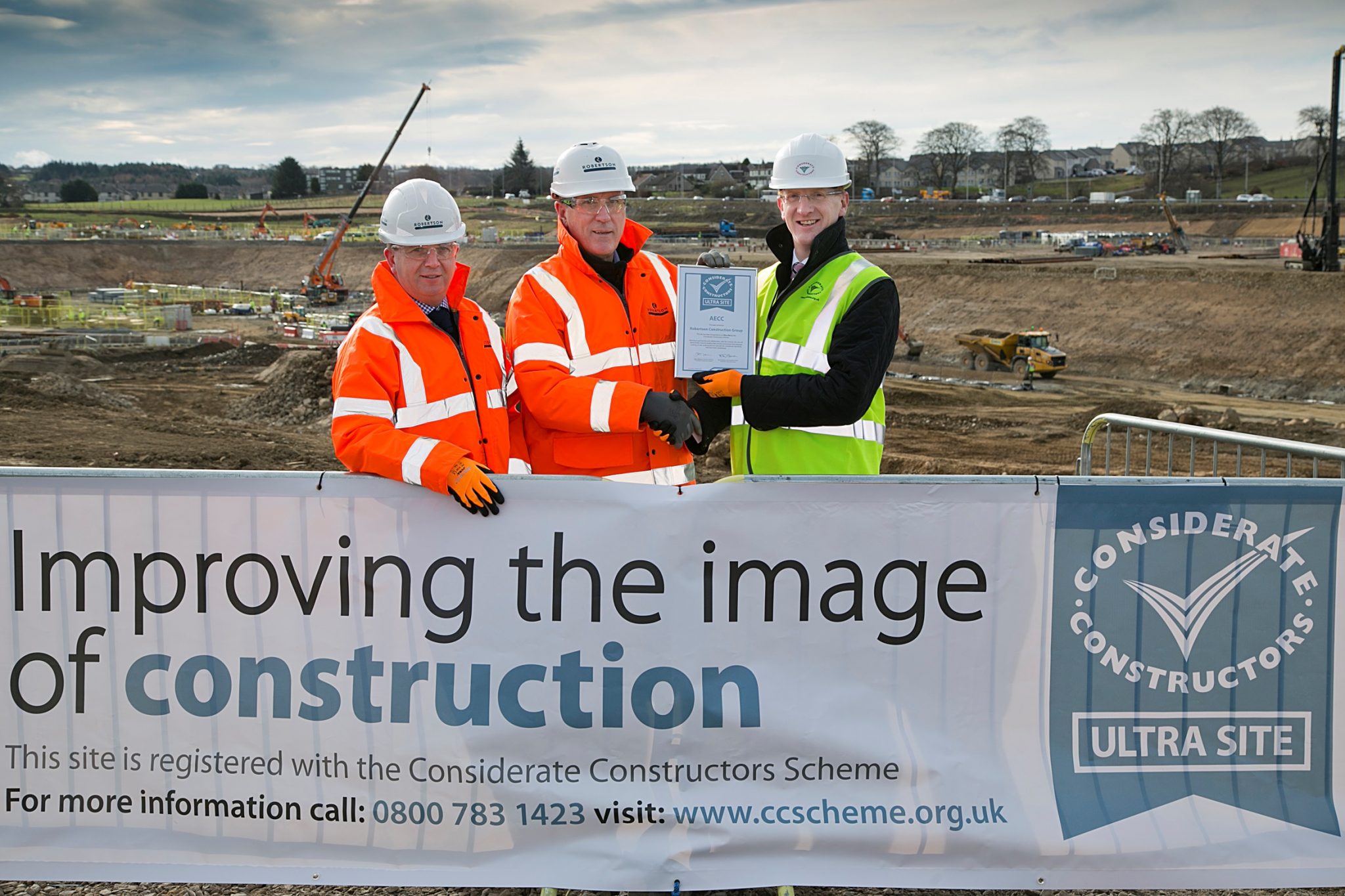 As well as building the new arena and conference centre and one of three on-site hotels, Robertson Group is also undertaking site preparatory works including ground and infrastructure works.

During the construction period, which commenced in August 2016 and is due to complete in 2019, 600 new jobs will be created, including a number of new apprenticeships.

“Since the introduction of Ultra Sites as a pilot in July 2015, only 11 out of over 14,000 registered sites within this period have received Ultra Site status, clearly demonstrating how AECC site is a beacon of best practice within the UK construction industry.

“Robertson Group is working relentlessly to drive even greater collaboration within its supply chain. This commitment has resulted in a huge number of benefits for the construction workforce, local community and environment – all helping to raise standards to improve the image of the construction industry.”

Robertson Group’s Chief Operating Officer, Derek Shewan added: This recognition is part of Robertson Group’s strategic approach to developing our business, in recognising the importance of collaboration and integration of, not only our supply chain, but also the local community. The AECC project demonstrates our commitment to CCS and the award of Ultra Site status is an outstanding achievement for everyone involved in this landmark project.

“Our achievement is testament to the project delivery team and their commitment to teamwork and collaboration across the supply chain. It is wonderful to have this independently recognised and I am certain that our success on-site to date is in large part thanks to this approach.

“Working in this way delivers economic, social and environmental benefits and all three are considered in all that we do on-site at the AECC.”

Aberdeen City Council finance, policy and resources committee convener Councillor Douglas Lumsden said: “The quality of the new exhibition and conference centre for Aberdeen is extremely important for the development as we want to anchor existing international events and compete nationally and internationally for new events, as well as by broadening the appeal of the north-east to a global audience.

“The new AECC will be a world-class destination which will help to grow and bolster the local economy while attracting major artists and events to the city, so we are delighted that Robertson Construction has been awarded the accolade for raising the industry’s standards.”

Nick Harris, Director at Henry Boot Developments said: “Working collaboratively is key to a successful project, so we’re absolutely delighted that our main contractor Robertson has achieved Ultra Site status on the new AECC. Both Henry Boot Developments and Robertson Construction are committed to achieving high standards on every aspect of this flagship new facility for Aberdeen and the north east, and having Ultra Site status demonstrates that the project has reached exemplary levels of best practice in terms of community, workforce and the environment.”

The government is due to launch its £2 billion Green Homes Grant scheme in late September, which will enable homeowners to make savings on their energy bills while … END_OF_DOCUMENT_TOKEN_TO_BE_REPLACED

Working as a skilled tradesperson can offer several great benefits. You will have the opportunity to pursue something that you’re passionate about, have lots of job … END_OF_DOCUMENT_TOKEN_TO_BE_REPLACED

Makita UK has launched a new and improved collection of belts and pouches to its extensive and popular range of accessories. The newly designed range makes it even easier … END_OF_DOCUMENT_TOKEN_TO_BE_REPLACED

In a positive move for the future of skills and talent in the plastering industry, British Gypsum has announced that its Site Ready Skimming Course has been successfully … END_OF_DOCUMENT_TOKEN_TO_BE_REPLACED